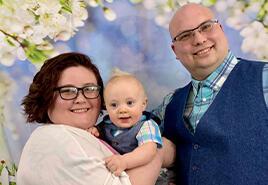 Putting Our Hearts and Souls Into It

We knew early on that it would be difficult for us to conceive biologically, so adoption was always our first option to grow our family. When it was time to start investing in the journey, we were referred to Angel Adoption by a coworker who was also an adoption/foster care specialist. We had so much love and support from our family and friends. Everyone in our lives was on board with us adopting. Although we felt the normal anxiety and excitement of embarking on this life-changing journey, we were ready to put our entire hearts and souls into it.

We were amazed when an expectant mother showed interest in us less than a month after our profile went live! She was a few months along, and we built a friendly relationship with her over the course of her pregnancy. We visited in person a couple of times and eventually became connected with legal services. About a month before her due date, she decided adoption was no longer her path. It was hard not to feel disappointed, but ultimately we wanted what was best for her and supported her decision.

It wasn’t much later that we got the call for another expectant mother opportunity. We began communicating with her and felt a connection right away. She knew she was going to be incarcerated during her pregnancy, and she wanted to make sure there was an adoption plan in place for her baby. We had no hesitations about making it work. We would do whatever was necessary to support her.

We received the most exciting phone call about our baby boy being born a week early! He was actually born at a different hospital than we had anticipated. The nurses just so happened to know the expectant mother and called her mom to inform her of the birth. She drove three hours there to make sure the hospital was aware of the adoption plans and to inform us of his arrival. Rebecca flew out right away and was the first person to hold him. Anthony drove over sixteen hours straight to get there that same evening to meet his son.

We met his maternal grandmother at the hospital, and she told us he was meant to be ours. We will never forget that visit with her and everything she did to ensure we adopted this little boy. The nurses at the hospital were amazing too. They advocated for us to have our own room and facilitated visits for the birthmother with the baby. Unfortunately, we were not allowed to visit with her because of her incarceration status. We never doubted her love or determination to do what was best for her son under such difficult circumstances.

While his birthmother remained incarcerated during the first year of his life, we maintained contact with her as best we could. Once she was released, we attempted to make contact a few times but did not hear back. His biological grandmother never intended to maintain an ongoing relationship with us after the adoption, so we’ve respected that. We will always be open to reconnecting if anyone wants to. We do know our son has a handful of older siblings, who were also placed for adoption.

The road to our son had potholes and detours we could not have predicted, but that’s not how we define our story. Our story is defined by the unconditional love that moved mountains so he could be with us. We never gave up on him or his birthmother, and she never gave up on us. Our son’s biological grandmother was an angel in our eyes.

Adoption was never a last resort or second choice for us. It was exactly how God intended that we grow our family. We dove in head first knowing what it would take to make our dreams come true, and we were met with the same devotion from our son’s biological mother and grandmother. We will never forget what they did for us.