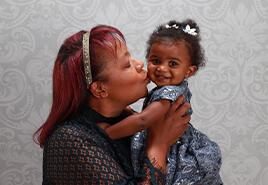 Deciding on adoption was so interesting as a single woman. I was getting older and did not have a partner but was ready to be a mother. Everything else in my life was where I wanted it to be, so I decided it was time to pursue my dream to be a mother. My brother was adopted, so I knew right away adoption was the road I would take to motherhood.

I signed with the first agency I would try to adopt through, and when that did not work out, I knew I needed to find the right company that could help make my dream come true. With all the factors working against me as a single woman, I knew I could only try this one more time. I found Angel Adoption while I was searching the web and felt like this was the company I wanted to work with. My family all supported me, and I signed on with Angel Adoption.

When I began, I was flooded with so many emotions. I was fearful I would not be successful during my time with Angel, just like the previous agency. Although I was hopeful, I was also apprehensive about navigating this journey again.

I received my first opportunity fairly quickly, which made all the fear wash away. I knew I had made the right choice and Angel Adoption was where I should be. The expectant mother had two boys and was pregnant with a little girl. She and the birthfather were on the same page with wanting to place. We built a nice relationship, and I was able to support her throughout the pregnancy. When the baby was born, however, she ultimately decided to parent. Although heartbroken, I brought the baby back to her mother. She apologized over and over, but I told her there was no need to apologize and told her everything was okay. I would always want a mother to do what she felt was right for her child even if that meant I would not be the parent. The baby for me was out there, and I tried to remember that at all times.

Although my first opportunity did not work out, my fears of whether or not I had made the right decision melted away. I was chosen for the first time, which was something that had not happened with the other agency. I knew I was in good hands and was hopeful about what my journey would look like.

Another Bump in the Road

It took months to get chosen again by an expectant mother, and when I received my second call, I was so excited. The expectant mother had just been awarded custody back of her children and was pregnant. She felt she was not in a place where she could take on another child. We talked often, and I was again building a wonderful relationship with an expectant mother.

Everything seemed to be going so well, and I was eager to continue to get to know her. When it was time to go to the hospital, I made the trip alone because my sister said it was too emotional for her to do this again with me. Ultimately the mother decided to parent because she felt it would be what was best in the long run. I respected her decision, but it was harder this time around than the first time. I asked the nurses if they could be the ones to bring the child back to the mother as I just did not have it in me this time. I was heartbroken, and feelings of doubt and wanting to throw in the towel set in.

When I told my family what had happened, they were supportive but also asked me how many more times I was going to put myself through this. I assured them I would do this as many times as it took to become a mother. I could not give up now and walk away without fulfilling my dream. I was prepared to travel the road to the baby who was meant for me no matter how bumpy it was.

Receiving a call that an expectant mother has chosen you is so indescribable. This would be the third time and the final call I would get. I started texting with the expectant mother, and we hit it off right away. We talked and texted and eventually decided on meeting in person about a month before her due date. The expectant mother’s family was getting together for a birthday party, so I went and met a lot of her extended family.

From the start, we knew the date the child would be born because she had a scheduled C-section. When I arrived at the hospital, I was so excited, but some fear from the past also crept up. It was hard to ignore that I had been in this exact situation two other times and left the hospital empty handed. No amount of worry was going to change the outcome though, so I chose to embrace the moment for what it was.

The expectant mother made the decision to allow me to be in the room for her C-section, which was a very special moment. She had told me previously that no matter what, she was going to place because she knew she had made the right decision. I appreciated the reassurance but also knew that things could change after the baby was born.

Once I laid eyes on my beautiful baby girl, I fell in love right away. It is hard to describe the feeling when you meet your baby for the first time and hear the cries. I was so hopeful in that moment, and any fears or doubts were washed away. We would spend the next few days in the hospital, and every day I would fall more and more in love with Kaylee.

Before Kaylee was born, we talked about what type of adoption the birthmother wanted. She wanted an open adoption, and I was supportive of that as well. We still talk often, and the grandparents send gifts to Kaylee. They sure spoil her the way any grandparents would! Kaylee FaceTimes with her biological family, and I send pictures and videos often as well. Kaylee is so loved by so many, and because of that love, my dreams came true!

Adoption was always in the cards for me, and no matter what happened along my journey, I found hope to get me through. I often felt like giving up or allowing myself to be jaded from past experiences. If I would have allowed any of that to stop me, then I would not have Kaylee. I trusted the process and knew I was on the path to my child.

If I could give any advice to others that are currently on this journey or thinking about this journey, it would be to not give up! Remember that the right baby will come at the right time, and sometimes the right time is not on your timeline of how you thought things would work out.

When you feel discouraged, rejected, or like giving up, remember to stay hopeful! Your baby is out there, and you need to stay strong to find him or her. When there are challenges, just remember that there are better things on the other side. Everything will be all right in the end, and if it is not all right, then it is not the end.