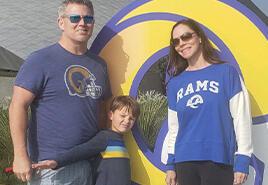 We always wanted to be parents. Joe wanted seven kids, but Jessica was not sold on that yet. We had tried for 15 years to become parents, and things were not happening for us. After miscarriages and disappointments, we decided to adopt. Joe and his mother were both adopted, so adoption was familiar and would be how we grew our own family.

We did some research and wanted to find what we felt would be the least risky option. Angel Adoption had an amazing program with high success, so it became clear that Angel would be who we worked with.

Our family is large and all very supportive of us choosing adoption. Joe went into our adoption journey confident because he was adopted, and his mother was also so excited for us to be growing our family through adoption. A short four months after we joined, we were chosen by our son’s birthmother. It was our first opportunity and would be our last!

It was the Fourth of July, and we had friends over celebrating when the expectant mother called us asking for money. She told us she was going to be evicted and needed help. We barely knew her, so we asked if we could meet her before we gave her money. Joe was on a flight that night meeting her and helped her get into a hotel room. He flew back the next day. We were all in because what other choice was there? Jessica was more apprehensive, but we balanced each other out in that way.

She would continue to ask for money throughout our connection. We began to think maybe she was only using us for money, and we became scared. We decided to blindly have faith because we knew this might be our only chance. We did not want to start over, and we had waited so long to be parents. We would travel to meet her a few times before she gave birth, which allowed us to build a nice relationship with her. There were things that worried us, but we knew we had no control over anything. This was not our baby yet, and it was not our body. The unknowns can be difficult, but trusting that everything will be okay is what gets you through.

The expectant mother was due to be induced, so we decided to fly to where she was and wait. It was a few days later that she was induced, and the hospital was amazing the whole time. They gave us a room and called us into her room once it was time to push. We were able to cut the umbilical cord, which was very special for us. Being in the room when Jaxon was born is something we will cherish forever.

He was so tiny and beautiful. Jessica got sick shortly after he was born, so she was not able to hold him. The nurse brought Jaxon into our room and said he was cold and wanted Joe to do skin to skin. He sat with Jaxon on his chest for 14 hours straight while watching Harry Potter. There was no way Joe was going to do anything other than hold this miracle.

The next day the birthmother wanted to hold Jaxon and spend time with him, which we respected. She laid in bed with him for twelve hours. We sat in the corner of the room while her family came to visit her and the baby. We felt so scared that she would decide to parent. The next morning, she requested to see him again, and we thought for sure she would decide to parent. We were wrong, and the next day we were able to take him home.

We still have a good relationship with her, and we flew her out to see Jaxon for his first birthday. We had moved from Illinois to California, so we spent the day at the beach chasing crabs. It was nice for Jaxon to spend time with his birthmother. Those visits did not continue, but we do stay in touch with her. We were not complete as a family and could not imagine our life without Jaxon. He is such a lover and truly an amazing child who loves to give words of encouragement and affirmation. Taking him to the grocery store is always funny since he introduces himself and talks to every single person. He never understood what a stranger was! He brings laughter and love into our family, and if it were not for his birthmother, we would not have him.

Having faith in Angel and the process is important. You will have challenges no matter what, whether it is with having multiple opportunities or figuring out the personal dynamics of your relationship with the birthmother. Always go all in, and take a leap of faith. What other choice do you have but to believe in what is in front of you?