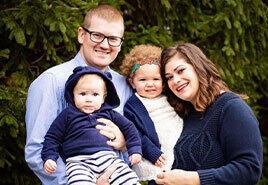 Early in our relationship, we were drawn to volunteering and having a servant’s heart. We both volunteered at a homeless shelter not far from our college campus, and after being married and moving for Tim’s job, Samantha started volunteering at a youth detention center where we met teens that had a rough environments while being in foster care. Our hearts were drawn toward helping others, and we felt a pull toward foster care before having biological children.

We were foster parents for two years and, in that time, had seven children placed with us. Each time a child left, a small part of us left with them. While fostering, we were also trying to biologically start our own family. After our second miscarriage and final foster placement leaving our home, we chose to close our foster license. We knew we wanted something more permanent, so we started looking at domestic and international adoption.

International adoption, the laws involved, and the potential medical risks were very scary to us, so we chose to go with what we knew and chose domestic adoption. The cost of adoption was daunting and we were concerned about how we were going to financially afford the process, but we knew this was our path to parenthood and we had to find a way.

An Angel to Us

Six months after joining Angel’s program, our profile was selected for the first and only time. Samantha was at track practice at her school when we got the call that an expectant mother was interested in speaking with us. We were floored—someone was actually drawn to us. We had a Skype call with the expectant mother that evening, and we immediately clicked. During our first call, we asked her what had stood out to her, and her answer shocked us. Up until that point, we had never really understood why Angel had asked for diversity in our profile photos, but the expectant mother told us she loved our “humble home” and wanted her child to grow up in a tight-knit family. In our family photos, she saw similarities between her sibling and ours and could picture her child fitting in so well with our family. Our conversation only lasted 15 to 20 minutes, but in that short amount of time, we knew this young woman was an angel brought into our lives by God and that the possibility of adopting her child was a dream come true.

That same weekend, we made the three-hour drive to the expectant mother’s state and took her out to dinner. We were so nervous to meet her in person and realized we were showing up empty handed and thought maybe we should have a small gift to show our appreciation for her. Before we met her for dinner, we ran into Macy’s and purchased a necklace with small angel wings on it. As it turned out, we had nothing to be nervous about. Our conversation at dinner flowed naturally, and we learned more about her and her dreams. She shared with us photos of her other children, and she confided in us that her support system did not approve of her choice of adoption. We reassured her she had a safe space with us to talk and that we were here to support her fully. We also shared our past with her, our “meet” story, and what we value as a family. At the end of dinner, we gifted her the necklace and let her know that our paths had crossed for a reason and that no matter what she ultimately chose to do, we were going to support her.

What’s Meant to Be

After our wonderful evening together, we did not hear from the expectant mother for six weeks. It was really difficult not knowing what was going to happen, but we still held onto hope and the belief that whatever was going to happen was what was meant to happen.

About one month before her due date, we heard from the expectant mother again that she was still interested in adoption and was officially choosing us. We were so grateful and relieved, but now we only had four weeks to prepare for a baby! During the six weeks we had not heard from the expectant mother, she had found out she was having a girl, and we started discussing baby names and agreed on a name together. Our family threw us a baby shower, and we were surprised by the number of people who were not supportive of our not-so-average baby shower. We were so excited for this next stage, and it hurt to not have all of our friends and family supporting us. Tim continued to remind us that we were allowed to be excited and trusting and that what was meant to be would be.

The expectant mother’s due date came and went without a baby, and we were starting to feel in the dark again. Then one night, exactly one week after her due date, we got the call she was in labor. We hit the road right away and headed to the hospital.

The expectant mother’s birth plan was to have Samantha as her support person and labor coach, and thankfully we were able to make it there in time to make that plan a reality. Throughout labor and delivery, Samantha’s sole focus was on the expectant mother, and it didn’t feel real that our daughter had been born. When Samantha finally went into the waiting room and told Tim our daughter was here, she broke down crying and couldn’t believe our adoption journey was over.

As Tim went to meet our daughter, Samantha returned to the birthmother to be sure she was doing okay. Not long after, the doctor came in and shared with Samantha that there were some unexpected medical concerns and that our daughter was going to need to spend time in the NICU. Samantha headed to the NICU, and we spent our first moments as a family of three with our beautiful daughter, Colette.

During Colette’s one and a half weeks in the NICU, we continued to care for her birthmother. We were able to get her a hotel room for three days so she could recover. Although our daughter’s birthmother lacked support throughout the adoption process, we were able to meet Colette’s biological grandmother, and while it wasn’t always comfortable, we wanted her to have the closure she was looking for.

Not long after Colette’s birth, both of our parents traveled to be with us. We knew regardless of the outcome, we were going to want their support, and it was amazing to have them there. After Colette’s birthmother signed her consent paperwork, we were able to treat her and her son to dinner out, along with our parents. Throughout our entire relationship with Colette’s birthmother, she had continued to say she wanted family for her daughter, and we wanted her to really experience what our family was like and the family she had chosen for her daughter.

Since Colette’s birth, we have had minimal contact with her birthmother, at her request. We have exchanged a handful of text messages and photos around the holidays but are open to much more. Around Colette’s third birthday, her birthmother did ask that we visit her, and we were thrilled! We had arranged a day to meet her, and after traveling to her hometown, she ultimately did not show. While it was difficult at the time, we believe she needed to see that we would actually show and that we still cared about her, even three years later.

We would love to continue to have a relationship with Colette’s birthmother when she is comfortable welcoming us into her lives. We know her life has been filled with ups and downs, and we are forever ready to support her when she needs us.

Having Grace and Love

Not long after we returned home with Colette, we found out we were pregnant with our son, Dominic. We could not believe that after years of infertility and two miscarriages, we were going to have two children under the age of one. When Colette was just eight and a half months old, her brother joined our family, and it has been so special to see their relationship grow being so close in age.

Our experience with foster care opened our eyes and hearts to the idea of loving anyone at any time. Both of our children are special, and their stories of how they came to us are beautiful. Our family would not be complete without Colette and the selfless decision her birthmother made. To be trusted to raise someone else’s child is a gift from God. Adoption taught us how to have grace for ourselves, for the birthmother, for her journey, and for our story together.