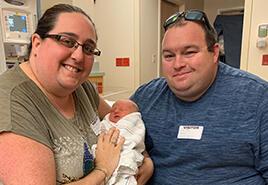 A Glimmer of Hope

Prior to meeting and getting married, Haley had a son, and when he was in grade school, she had congestive heart failure and had to have a pacemaker put in. When we met and were married, we knew we wanted a child together and for Tony to experience fatherhood, but it was no longer possible for Haley to carry a child. We knew our path to parenthood together was adoption.

We started researching and speaking with multiple providers. We spoke with adoptees and other adoptive parents as well. While researching, we came across Angel and had an initial conversation with them. Shortly after our conversation, Haley’s mom passed away, and we chose to pause our research to focus on our family.

During this time, prior to working with Angel, we had two opportunities with expectant mothers. Both were connections we made through friends who knew we were considering adoption, but neither worked out. The two opportunities sparked a glimmer of hope in us though, and we were more excited than ever to move forward with Angel.

Our wait in Angel’s program was long. Admittedly, we felt ourselves losing hope a number of times. We had a handful of situational opportunities presented to us, but taking into consideration Haley’s health, we knew we were not in a position to move forward with these.

As we were approaching two years with Angel, Haley received a call that would change our lives. Angel called and let us know that not only was our profile selected but there was a baby girl born and her birthmother and birthfather had already signed their parental rights over. We did not hesitate to say yes immediately.

We had minimal details about the baby, her birthparents, or the situation, but we knew she was in a hospital only two hours from us. The following morning, we first headed to the social worker’s office to sign paperwork, and from there, we went to the hospital. While on our way to the hospital, we had the opportunity to speak with the birthmother for the first time. At her request, we did not even know her name until she introduced herself to us through text. Our conversation was short, but coincidentally, we passed a small canal that shared the same name as the birthmother. It felt like fate.

We met with the doctors at the hospital and found out more about the baby. We learned she was going to spend a couple weeks in the NICU. We were unfazed, and all we wanted was to meet our daughter. When we were finally able to meet our daughter, Faith, it was surreal. We had dreamed of this moment, and suddenly here it was. Less than 24 hours before, we were preparing for a cruise, but now we were parents to the sweetest baby girl.

We spent two and a half weeks with Faith in the NICU. As she gained strength every day, we were her biggest cheerleaders, and when she was finally discharged, we could not wait to bring her home.

A Sense of Peace

The wait for Faith was long and tested us, but our patience and continued hope are what kept pushing us forward. We are forever grateful to her birthparents for choosing adoption and for blessing us. Faith is our greatest gift, and life hasn’t been the same since she joined our family.