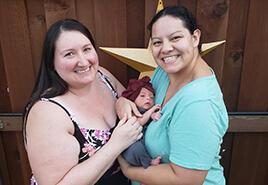 The Road to Angel

When it came time to talk about a family, adoption was an easy decision. Christina’s mother was adopted, so it seemed natural to grow our family that way. We initially started our journey with a local company specializing in foster-to-adopt situations. After doing a few classes and talking with them further, we realized we would rather do private adoption. We thought after bringing a child into our home it would be too difficult for us to not be able to keep that child forever.

We were back to square one. After researching online, we came across Angel Adoption’s website and instantly were impressed with how they were birthmother focused. The number of successful adoptions they have done also stood out to us. We both agreed Angel Adoption would be the one to help us on our journey to our child.

When we finally began our journey, we were excited but also nervous. Telling our family and friends made it so official, and they were so excited for us. Christina’s grandmother started to cry as this was such a full-circle moment for her. Having adopted her daughter and now having her granddaughter waiting to adopt was surreal. She told us all the best advice, including the most important advice: Be open with our future child. Do not hide that they are adopted as it is who they are.

Jessica’s parents were equally as excited about their potential first grandchild. Spoiling our future child was something they could not wait to do of course! Everyone in our lives rallied behind us, and feeling and seeing that support is something we will cherish forever.

We were fortunate to not have to wait long before we were chosen by an expectant mother. It is still so hard to explain the moment when you are called and told you are chosen. Butterflies instantly happened, and we became so excited. This was what we had been waiting for.

After getting to know the expectant mother, it was time to meet her for the first time in person. The expectant mother was scheduled for a C-section, which allowed us to go to her state a few days before. We were able to spend some time with her and the birthfather before the baby would enter the world.

Once we arrived at the hospital, laying eyes on the most beautiful baby girl was so surreal. Even when we look at her now, we just have to pinch ourselves because it does not feel real. There was no way of preparing for how quickly we fell in love. We were also aware this could be so difficult for the birthmother, so we tried to support her the best we could over the next few days.

The Roller Coaster We Were Not Prepared For

After Zoey was born, the plan was always for us to go into a room and be with her until she was discharged and papers were signed. That was not what happened, because the birthmother wanted to spend some time with Zoey as well. She told us this was much harder than she had anticipated, which we tried our best to be supportive of. We could not imagine what she was trying to navigate through at that time. We did our best to keep it together, but we were terrified.

Over the next few days, nothing could prepare us for what was to come. We told the birthmother we were there for her and that we understood and respected what she wanted. The birthmother cried with us, and although it was hard, it was also a beautiful moment.

At the scheduled time for papers to be signed, the birthmother could not sign the papers. When we were told, we instantly became so scared that this was it—this was not going to happen. We tried so hard to not let our minds wander and to take it moment by moment. It was not going to do anyone any good for us to freak out, and we did not want to assume the worst. The thought of bonding with this sweet baby girl for the past few days in the hospital and not leaving with her was gut wrenching.

Time felt like it stopped, and we wondered what would happen. The birthmother told us she could not sign, and our worst fear came true. We could feel her pulling away, and what once felt like a very close relationship felt like a distant one. Looking back, we realize she was just doing what she felt was right, and we were not angry. After discussing our next steps, we felt it would be best for us to leave the hospital and start the journey back to our home state. As we were leaving the hospital, we ran into the birthfather. He asked us where we were going, so we explained that the birthmother did not want to place at this time. He asked us if we were completely done at this point, and our answer was “No!” We were absolutely not done but were trying to be respectful of the birthmother and her process.

The plane ride and next few days were pure anguish for us. We cannot even put into words all the emotions we were feeling at any given moment. We took time to grieve and cried and cried until we just could not cry anymore. The baby we felt was meant for us was states away and not home with us. Why did this happen, and what could we have done differently?

After four days at home, we received a call from the social worker. She told us the birthmother had signed the papers and we could come get our baby. She asked us how fast we could get there, and Christina leaped out of bed so fast her feet never hit the ground. We were not unpacked from our first trip there, so we just grabbed those same suitcases and were on a plane a few hours later.

Bringing our daughter home was the best day of our lives. To be so close and feel like it was not happening and then to have it actually happen created a whirlwind of emotions. But we would do it all over again if it led us to Zoey.

The biggest challenges during that time were staying level-headed and trying to put ourselves into the birthmother’s shoes. It was important to remember everything she was going through, and if we had acted on our emotions, that would have not been good for anyone involved. We needed to give her space and grace, and because of that, we were blessed with Zoey.

It All Worked Out

We still keep in contact with our daughter’s birthmother using an app we can post to with pictures and updates. This has worked amazingly so that we never feel like we are overwhelming her. She can go onto the app whenever she is ready and view updates and pictures. We want to keep the door open for whatever communication we are able to have as this will benefit Zoey. We are so thankful and humbled by the strength of Zoey’s birthmother because it allowed us to get the chance to love Zoey every single day for the rest of our lives.

Remember that the expectant mother is going through a lot, and showing empathy and compassion for her is important. Keep in mind that even if she seems sure and chooses you, this will continue to be a hard decision. Preparing for and realizing this will benefit you and the birthmother. Trust the process, trust your team, and, most importantly, trust yourself.