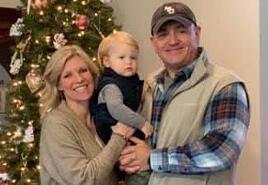 Meeting later in life did not allow us to try for a family till we were much older. We imagined we would have some issues getting pregnant naturally because of our age. After about a year, we agreed it was time to go to a specialist and look into infertility treatments. After talking with the doctor, we were told it was very unlikely he would be able to retrieve any eggs and that this route would not be successful for us. Of course we were devastated, but we were not going to let that keep us from something we knew we wanted so badly. With the odds stacked against us, we still moved forward with treatments because we needed to know we tried everything.

After a few failed egg retrievals, we knew we needed to move on. The process took a mental, physical, and emotional toll on us. We started to discuss other options because we wanted this so badly! We talked to friends who were adopted and had adopted themselves, which led us to lean into adoption.

Brandi is a social worker, and she had found a local agency at a work fair she attended. After talking with them, we found out they had a three-year waitlist at the time. They also were a local agency, and we preferred a company that worked nationally. We came across Angel Adoption and right away knew this was the company we wanted to work with.

A Multitude of Feelings

Starting our adoption process was exciting! Greg was optimistic in the beginning because we had no idea what to expect. Greg knew he needed to be very grounded and level-headed throughout our journey because Brandi would not be. We knew Brandi would have a harder time navigating disruptions or failed opportunities if that ever happened. Brandi dove in headfirst and became so invested so quickly. Brandi never had a negative thought that maybe this would not work out. In her mind, this was going to work out, and there would be a baby at the end of this.

Our family was supportive as well, and Brandi’s friends were supportive and excited. They all knew how badly we wanted to be parents and wanted it just as badly for us. Greg did have some friends who were not as on board at first. We were older, so our friends had children who were going to college at this time; they could not wrap their heads around the fact that we wanted a newborn at our age. Overall, though, we felt loved and supported as we embarked on this journey, so we were not going to let a few negative thoughts get to us.

We had a few interested expectant mothers throughout our journey, but none of those ended with a placement. It is easy to get discouraged when things are not working out the way you had envisioned or hoped. Brandi led with her heart with every opportunity and would instantly forget the pain so she could move on. Greg would make sure he was very strong for Brandi so things could be easy for her. Together we navigated those failed opportunities the best we could.

One day we got a call that a child was already born, and it was a boy! He was born a few days prior, and we were told the birthmother would be making a decision over the weekend. Those next few days felt like months or even years. We did not hear anything over the weekend, so come Monday, we felt like we were back to square one again. It actually took months before the birthmother would make her decision. We would be lying if we said it was not heartbreaking to be so close to something we had been waiting so long for.

Then the phone rang, and it was the birthmother’s social worker! We were given a time limit of about six hours, but there was no way to get there in time. We had another family who lived in the state where Greyson was born act on our behalf, and they stayed there with Greyson overnight as we traveled as quickly as possible. The time it took to get there felt like forever even though it was a whirlwind. We were so excited to meet our baby boy!

We remember thinking how tiny Greyson looked. Brandi held him, and in that moment, everything felt right. This was it. This was why nothing else worked out, and we finally had all the answers to our questions. When Greg held Greyson for the first time, he felt like he was going to break this tiny, beautiful bundle of joy. All the emotions Greg had kept inside came flooding out. It is amazing how just a few moments with Greyson changed our lives forever.

We could not imagine life without Greyson, from him waking Greg up in the morning by poking him in the eye and his sweet snuggles with Brandi. He is the apple of our eye and truly was meant to be a part of our family. Everyone adores Greyson, and he could not be more loved by so many people.

When you are navigating adoption remember to be open-minded and patient. What is meant to be will be and it is easy to become frustrated with the process. You are not in control, Angel is not in control. The expectant mother is in control and that is the way it should be. Most importantly remember that there is always a reason why something does not work out and it will make sense. Something better is around the corner and that something better is the baby that is meant for your heart and home.