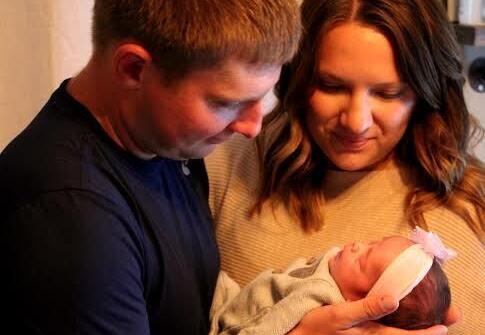 We had known for some time that Allie carrying a child wasn’t in the best interest of her health, so we had always discussed adoption. Choosing adoption was an easy choice for us, and we were excited to get started with the process. We have a close friend who adopted, and we spent time speaking with her about her experience. We took that into consideration when looking at adoption providers. We ended up speaking with four different providers and felt the most comfortable with Angel.

We were so excited to finally get started! The support from our large families was phenomenal, and they were grateful to see we were prioritizing Allie’s health while still growing our family.

Up, Down, and Up Again

Not long after joining Angel’s program, we received THE call that our profile was chosen. We were instantly anxious and had no idea what to say, but speaking with our coordinator and reviewing the resources she provided us helped calm our fears. We started a group text with the expectant mother, and that was the start of our slow-building relationship.

The expectant mother preferred to only text and was usually slow to respond. We knew she had a lot going on and every couple days would send a supportive text so she knew we were thinking of her. After only a handful of conversations, we stopped hearing from the expectant mother and went two months without any contact. Angel recommended closing out the opportunity, but encouraged us to pick back up with the expectant mother if she did reach out.

Although we were not speaking with the expectant mother anymore, we were mentally tracking her pregnancy. As we inched closer to her due date, we started to accept this likely wasn’t the opportunity meant for us, but then, out of the blue, the expectant mother called us. We hadn’t spoken on the phone before, but we picked up right where we left off and started rebuilding our relationship. We were shocked to hear from her, but our hearts were open to her. We knew she hadn’t formally selected a family yet and there were still other potential families, but we felt confident when she invited us to visit her in her home state.

We drove to the expectant mother’s home state and were excited to meet her. When we didn’t hear from her in the morning, we were nervous but thankfully heard from her that afternoon. We met her at her favorite restaurant and sat and talked for what felt like forever. The entire meal was relaxed and felt natural. The following morning, we went to breakfast at the expectant mother’s mom’s house. We weren’t sure what to expect, but her mom was so welcoming and supportive of her daughter’s choice. After such a great weekend together, the expectant mother called Angel and officially selected us as her family.

Where Do We Go From Here?

For two weeks after our visit, our conversations with the expectant mother were minimal; she no longer called us, and her texts were short. We knew she was planning to deliver one state over from hers, and we were prepared to travel. It wasn’t just us who weren’t hearing from her; she wasn’t in contact with Angel or the attorney either.

Just weeks before she was due, she contacted Angel and said she was no longer interested in adoption. We were devastated. Our family had thrown us a small baby shower, and what had been so close was suddenly so far away. Through our heartbreak, we still reached out to the expectant mother and sent her a short text letting her know we were still rooting for her and always supported her choices.

Two days later, we received a call from Angel that the baby had been born and now the birthmother wanted to move forward with adoption. We were blown away. It had been such an emotional 48 hours, and this was the last thing we expected. Without speaking to Max, Allie said yes, knowing we were all in with this birthmother and her child. While we struggled to believe this was happening, we were in contact with both our attorney and the attorney in the birthmother’s state. Through our conversations, we learned there had been some unknown medical concerns at birth and there were outside factors potentially jeopardizing the adoption. It seemed impossible to sit at home and wait, but at the advice of our legal providers, that’s what we did.

That same evening, the attorney in the birth state finally outlined for us two options: We could sit and wait, protect ourselves, but potentially not be able to adopt this baby, or we could travel to the birth state and essentially hope for the best. It wasn’t even a question to us; we packed our bags and started the fourteen-hour drive.

We got to the birth state the following afternoon and checked into a hotel near the hospital. The birthmother was experiencing medical complications of her own, so we were unable to see her or the baby.

When we were finally able to be in the hospital after waiting over the weekend, we were only able to meet with the birthmother. She had concerns about our open adoption agreement, and we knew how important it was for her to trust us. Even after a long conversation, she continued to doubt us and the process and was considering parenting. That evening she considered discharging with the baby and asked to sign parental consents the following day. While we wanted to support her adoption plan, we knew that emotionally, we were unable to wait one more day. If she was going to choose to parent, we wanted to support her and if she was going to choose adoption, we wanted to support her, but living in limbo was no longer an option for us.

We were able to meet our daughter, Rohen, with her birth mother by our side. It was a special moment to share with both us and her. We could not believe that after the last handful of days, she was real and we were her parents.

A Journey Meant for Us

Our adoption of Rohen would not have been possible without the love and support of our families and our trust in the process. There were many times when we questioned if we had said the wrong thing or had been too honest with Rohen’s birthmother and that was why our relationship wasn’t progressing. As it turned out, this was the journey meant for us, and we were strong enough to handle it.

Stronger than us, though, is Rohen’s birthmother. We currently have an open adoption with her and hope we can maintain that relationship. We would love for Rohen to have a bonus mom in her birthmother. We are forever thankful for the path that brought us to Rohen and the relationship we were able to build along the way.