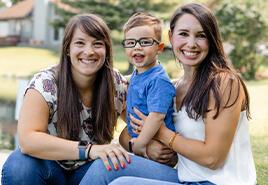 Our Path to Motherhood

We chose to adopt for several reasons. One major reason was that we wanted to have the opportunity to help out someone in need if we could. We looked at other options for growing our family, but they were missing that opportunity and simply didn’t feel right. We also loved that in adoption, we could both be equally involved in the process.

We came across Angel through a Google search while looking for adoption professionals. We have a cousin who adopted through an agency in our hometown, but they were religious and did not work with same sex couples. This really helped us realize Angel was the right choice for us, and we started the process of applying right away.

A Multitude of Feelings

When we first began our adoption journey with Angel, we were anxious about it all. We were worried about the interview process and being selected to work with Angel at first. We so wanted to be part of Angel’s program to help us become a family. Once we were accepted, we got right to work on building our profile and getting things going to complete our home study.

Our friends and family were so supportive and excited when they found out we were going to adopt. Of course they were hoping things would go smoothly for us. Our family has a lot of ties to adoption. It made it all the more special to us to bring another adopted child into the family.

All In No Matter What

We had a failed adoption early on in our journey. We were literally on our way to get the baby as the expectant mother was in labor. The expectant father showed up at the hospital before we got there and disrupted the whole process. That was very difficult for us. It was hard to stay positive and keep in mind that there was a baby who was meant for us out there.

One expectant mother we had turned down as we had been chosen shortly after the failed adoption. Another mother chose another family, and the other lost the baby. After connecting with Benson’s birthmother, we went and met her in person that weekend. We were anxious to be meeting someone so soon after connecting, but after being through all our previous experiences, we had nothing to lose. We were happy to make the trip to meet in person and talk. We met Benson’s birthmother at a restaurant, along with her friend whom she had brought along. The four of us sat, ate, and talked at the restaurant for an hour or two. This meeting went really well. It was a bit nerve-wracking while wondering how she felt about the meeting, but no matter what, we were all in at this point. We had to hang on to the belief that throughout this journey, things would happen how they were meant to. Not to say there were not moments that were very hard, but we also knew things would work out how they were supposed to. We tried to not get our hopes up too much throughout our adoption journey, but it is hard not to when they call telling you that you have been chosen by a mother.

Initially, Benson’s birthmother had wanted a closed adoption. However, she changed her mind after she got to know us and Benson was born. Now we communicate mostly over social media and send photos of Benson as well as updates every six months or so.

Benson was actually overdue, and his birthmother was scheduled to be induced. We were fortunate to be able to plan to be there for his birth. We were able to go out to dinner the night before her induction. We also got to meet her mother and sister. While at dinner, she was having contractions and went into labor naturally. She ended up having him the next morning. Benson’s birthmother preferred that we cared for him after the birth. He was brought right to us, and we were able to do skin to skin and feed him, and they actually left his cord long for us to cut.

After Benson was born, we wanted to let our family know about his birth. We had not told anyone about this adoption, because after having to tell people about the failed adoption, we wanted to be sure it was going to work out before we told anybody. Nobody knew about Benson. Once his birthmother signed the papers, we were calling and texting everybody to tell them the news. Everyone was so happy and excited for us.

When we were discharged from the hospital, we were able to stay with our brother and sister-in-law, who lived about four hours from the hospital. It was so amazing to have this option. While we were waiting for ICPC to finish, our family could also come and see baby Benson. This was truly such an amazing experience and another reason why we feel Benson was meant for us.

Throughout this journey, it was challenging to know what to do and what not to do. We often wondered if we were being overly communicative. We also did not want to be annoying but did not want to seem like we were not excited. The hardest thing for us was just figuring out our relationship with the expectant mother and how to navigate that. We wanted her to know we cared how she was feeling but did not want to overdo it. We also both wanted to engage in the conversation.

We would recommend not buying too many things or having a nursery set up, like Angel advises. We encourage you to be selective with who you tell about your journey. If a connection with an expectant mother does not work out, it is so painful and emotional to share and just makes it a lot harder.

As exciting and nerve wracking as the whole process is, you have to be all in. This is your journey, and when you get your baby, it will all make sense. You will look back on it all, as we have, and realize it all happens as it is supposed to. Adopting Benson made every single other moment in the journey worth it.