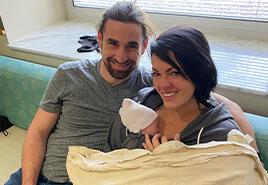 A Tough Pill to Swallow

We always wanted to adopt, but we thought we would eventually adopt older children or a sibling group after having biological children. Unfortunately, that didn’t go as planned, and we struggled with infertility while trying to conceive. At that point, we decided to explore adopting a newborn to give ourselves that experience as first-time parents.

To be honest, we felt some skepticism and frustration toward the adoption process in the U.S. once we started doing our research. Graham is from the UK, and everything is different there! We tried to adopt internationally from Scotland, where he’s from, but there weren’t any children who needed homes because of the assistance for families over there.

It was a tough pill to swallow knowing we had already gone through the financial and emotional struggles of IVF. Now we had to accept that the same exact disappointments could happen with adoption.

We completed our home study first and were given the referral to Angel Adoption from our home study agency. We also had a couple of friends who worked with Angel Adoption. Our friends’ experiences were mixed. One friend who worked with Angel years ago did not have a positive experience, so that definitely brought us some hesitation. However, another friend who adopted more recently with Angel shared a very positive experience with us. We stayed open minded and called Angel.

After the first phone call, we felt reassured and confident that this was the right route for us to take. We had talked to other agencies, but it didn’t feel the same as talking to Angel. All of our questions were answered honestly by Angel, and that established the foundation we were looking for. We also really loved and appreciated that Angel’s website and company values were not solely focused around religious beliefs. Religion is not every adoptive family’s journey nor is it every expectant parent’s journey. Angel was open and accepting to everyone, and that completely resonated with us.

Starting our journey with Angel was seamless, and building our profile was a pleasant experience. The team at Angel always remained supportive and friendly with the back and forth involved in that process. We were obviously excited about this new adventure but had some fears as well. We were scared of the thought of getting to know multiple expectant mothers before an opportunity worked out. We didn’t know how we would handle building several different relationships and investing emotionally if that was what it was going to take. We were obviously prepared to do it but knew it might be difficult for us.

Fortunately for us, our first opportunity with an expectant mother was the one that was meant to be. Less than two weeks after our profile went live, we got the call! We attributed this in part to Angel Adoption’s process and how they helped expectant mothers view families who aligned with what they were looking for. We experienced the early stages of fear and excitement about starting our adoption journey while also being connected with an expectant mother and waiting for her to give birth. It was a lot, but we wouldn’t have wanted it to play out any other way! We couldn’t believe how fast things happened, but we were so happy with the relationship we were building with the expectant mother.

We had a lot in common with the expectant mother, and we established a very honest, direct relationship from the start. We focused on allowing our conversations to unfold organically, and didn’t force anything. It felt like we were dating! We talked about everything from our favorite colors to our upbringings. It felt very natural and was incredibly special to us. We felt it was important to reassure her we would always support her decisions, no matter what. If parenting her baby was best for her, then that’s what we wanted for her. We felt like this was her journey, and we were just a part of it.

We had a few months until her due date, and we didn’t live too far away from each other. We talked about meeting in person before the due date, but ultimately we decided to just wait because we all worked a lot. She expressed that meeting us in person would not impact or change her decision, and that made us feel really comfortable. We continued phone contact until the night before her scheduled induction when we finally met in person for dinner. It was so exciting to solidify that personal connection. We even received some colostrum from Alec’s expectant mother which ended up providing him with his first TWO bottles. We were all grateful he could start off his life that way.

Dana was there the entire time. She slept on the couch in the hospital room and provided all the support she could to the expectant mother. There were many cherished moments that night, including a gifted stuffed cat from Alec’s expectant mother so that he would always have a piece of her. Because of COVID restrictions, the hospital couldn’t give us a room until the baby was born, so Graham ended up sleeping in the car in the parking lot because he didn’t want to miss anything!

Dana was present for the birth. Since the expectant mother did not want to see the baby, they put a drape up for her, which she appreciated. We were thankful it was a pretty quick process for her once she started pushing. Baby Alec was super alert and opened his eyes as soon as he could. Dana felt he was staring straight into her soul, and it was the most beautiful moment ever.

The delivering doctor whispered, “Congratulations, Mom,” to Dana, who immediately started balling. There’s no etiquette for this situation and we didn’t know exactly what to do or say, so we followed our hearts in the moment. Dana peeked around the drape to tell the expectant mother thank you and expressed how incredible she was. They both teared up and shared an emotional moment together.

Once it was just the three of us in our own room, it really hit us. Alec was doing skin-to-skin with Dana, and Graham held them both in his arms. Lots of tears were shed! We didn’t know what to expect going into this situation, and we remember thinking we didn’t know we could be this happy or that our hearts could grow this big. Everything happened so fast, and a lot of emotions were involved. What we remember most are those little moments, like our first family hug and making eye contact with Alec as he was being born.

We stayed at a nearby hotel for the remaining week and a half. We couldn’t call Alec ours for at least seven days while we waited for the revocation period. That was emotionally tough since we were already completely in love with him. Another added stressor was an abnormal test result that had come back showing he possibly had an immune disorder that could be fatal if untreated. It was overwhelming and confusing to take him to a pediatrician during that time. Nothing about the test results made us hesitate about adopting him. If he was meant to be ours, that was all that mattered. It’s been a whirlwind of doctors, labs, and tests, but everything is looking better, and we are hopeful for the best outcome possible.

As far as our relationship with Alec’s birthmother, we remain as close as ever. We talk almost everyday and share a genuine friendship with each other that is not just about this adoption journey. It was just the beginning for us. She is still processing her journey and does not want to see any pictures of Alec yet. We continue to support her and reassure her that we have an album of pictures and videos ready when she is. She decided early on that she only wanted to meet Alec in person if he decides that is what he wants in the future. She left it up to him, and we find that very admirable.

This process is a two-way street. We shared a realization with Alec’s birthmother during our journey about just how blessed we felt to have found each other and to have chosen each other. It was always about Alec, of course, but we had an epiphany halfway through the connection, like, dang, our lives are merged together forever, and when you think of it that way, it can change your entire perspective on the relationship you’re building.