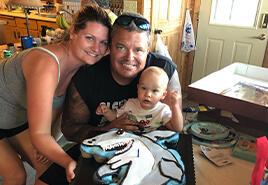 Once we were ready to move forward with adoption, we started interviewing different adoption professionals. We interviewed one in our area, but after talking to them, we did not feel they were the best fit for us. From what we had shared with them, they actually thought Angel was the best option for us.

Our biggest concern going into this process was choosing an adoption team that had a shorter time frame. We were not interested in waiting five years to adopt since we were not getting any younger. What drew us to Angel was their time frame of one to two years. We knew working with Angel would be beneficial for us in the long run, and above all, their dedication and effort were very visible.

All Was Great Until it Wasn’t

We got in contact with an expectant mother early on in her pregnancy. In the beginning of our relationship, communication was rocky. There would be times when she would not answer her phone, which set us up for how our communication would be moving forward. The first time we spoke to her, though, it was wonderful! The best way for us to describe her is as a true Southern belle.

She was going through many hardships at the time of her pregnancy, so it was nice to be able to create a safe space for her. Her strength and courage are very admirable. All was great for three weeks, until we stopped hearing from her. However, we did not cut off communication. We continued to reach out for the next three months, checking in here and there. However, we did not hear back from her.

In the meantime, we were contacted by another expectant mother who found us on the website. She was wonderful. Nonetheless, getting in contact with her solidified our true connection with the first expectant mother. Bethann was so drawn to her. They clicked so well! Through the support of Angel, we thankfully never lost contact. Angel reminded us that anything can happen.

Lo and behold, many “Happy Holiday” and “How are you texts?” later, she resurfaced. The fact that she went out of her way to find us on Facebook meant something to us. She messaged Bethann to let her know she had found out the baby was a boy, and she still wanted to go through with the adoption. We were extremely excited but felt so guarded at this point. We did not know what might happen based on our prior history together.

She had a doctor’s appointment, and she let us know she was one and a half centimeters dilated. Bethann asked her if she wanted us to drive out there, and once again, we heard nothing from her. Crickets. She ended up calling us early one morning, at 2 a.m., to tell us it was time and that we had to get to the hospital. After that phone call, we were in such distress. She had called us at the last minute, and we felt we had no time to prepare for this moment.

It All Comes Full Circle

The first time we laid eyes on our son, Ethyn, was breathtaking. We were overwhelmed with emotion and in awe of how tiny he was. We ended up meeting our son’s birth grandfather as well. He was a very nice, put-together man. There was some tension with the rest of her family. The family wanted the birthmother to parent, but ultimately it was her decision to make.

On Ethyn’s second birthday, we received a FaceTime call from his birthparents, biological sister, and biological grandma. Bethann ended up connecting with our son’s aunt as well. She actually reached out to Bethann to thank her. She admitted the process was difficult for the family, but she was grateful that Ethyn was so loved by us. It all comes full circle, and it is so wonderful to have the support of her family as well.

Bethann was really invested in our son’s birthmother’s pregnancy. She downloaded pregnancy apps and tracked the weeks of her. She could even see how big Ethyn was at every stage, so she felt like she was on the ride with our son’s birthmother. We really connected with and adored her. Although things were shaky throughout the whole time we were talking to her, we never stopped communicating. There were highs and there were lows, but at the end of it all, our son’s birthmother was a true blessing who gave us the greatest gift: our son, Ethyn.