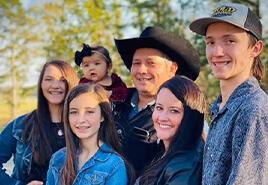 Coming into our marriage, we both had children from previous relationships and always felt content with our blended family. Our children all got along great, and we believed our family was complete. It wasn’t until a family member considered placing her child with us that we started feeling a pull to adoption. While we considered adoption more seriously, we always believed it to be out of reach due to finances, but neither of us could let the idea go. After watching a particularly moving video at church, Crystal approached Jason with the idea of adoption. He was all in, and our adoption journey began.

We initially started the adoption process with a large national agency, and after a number of negative interactions with them and our first social worker, we terminated our contract with them. We were feeling pretty defeated and weren’t really sure what the process was for us. We found Angel online, and after our initial meeting with them, our hope was renewed. They did not share any of the concerns the first agency did, and they were confident our blended family could be successful through the adoption process.

A Handful of Firsts

Only three months into waiting, Angel notified us that our profile had been selected. Jason was out of town for work with limited service, but Crystal was able to get the exciting news to him that she would be speaking with the expectant mother that evening. Going into the conversation, we were nervous; we thought she would have tons of questions, and we wanted to answer them “correctly.” As it turned out, the expectant mother did not have too many questions but had a great connection with Crystal during our first call. She was honest with us that when she first found out she was pregnant, she was overwhelmed with the idea of another child while having a toddler at home already and struggling financially. She was instantly drawn to our profile online and didn’t feel the need to look at any other profiles.

Not long after our first conversation, we got in contact with a local social worker to meet with the expectant mother and help with her living arrangements. The social worker who met her felt great about their conversation and had no typical red flags but wanted us to be aware that she was early in her pregnancy and it was a financial risk to start assisting her this early. We knew we wanted to continue to work with this expectant mother and we wanted her to be comfortable, so we decided to trust the process and chose to continue with the relationship.

Shortly after hiring attorney services, we went to the expectant mother’s home state to visit with her. We were able to attend a doctor’s appointment and found out together that she was having a baby girl. We later visited some local spots with her and took pictures together, even having a caricature picture drawn of us to announce our plans to adopt a baby girl.

A couple months after our visit, the expectant mother asked if she could come visit our hometown for a couple days. She was curious about where her daughter was going to be raised, and we didn’t blame her. We bought her a plane ticket, and after some airport hiccups, she was on her way to us on her first flight ever. We had planned for a 3D ultrasound while she was in town, and both our moms, Jason’s sister, and our daughters were able to attend the appointment with us. It felt so special to have the most important women in our lives connecting with each other and to be part of the journey with us. It snowed that weekend, and the expectant mother was able to experience snow for the first time. It wasn’t much, but it was fun to be part of another first for her.

The doctor ultimately chose to induce the expectant mother, and the day we arrived at the birthing center, they happened to have seventeen other women in labor arrive. The expectant mother’s C-section continued to be pushed back until 5 p.m. Crystal was able to be part of the expectant mother’s surgery, and our daughter, Ravyn, was born at 5:30. During surgery, there were some complications, and while Crystal didn’t know all of what was happening, she knew it wasn’t typical and that it was dangerous.

We had agreed ahead of time that we would have our own room with Ravyn, but due to the number of women that had come in that day to have babies, we weren’t sure we were going to have our own room. Ravyn ended up in the NICU to monitor her breathing, and we had an angel of a nurse who allowed Jason in after hours to meet Ravyn while Crystal went to check on the birthmother. Ravyn’s birthmother was not yet out of surgery and recovery, but thankfully Jason was there for her when she was brought back to her room.

Part of Ravyn’s birthmother’s birth plan was that she did not want to meet her daughter until after she had signed parental consents, but the following day, she asked to spend fifteen minutes with Ravyn. We admittedly were a bit nervous, but we were not going to deny Ravyn’s birthmother that moment. After fifteen minutes, Ravyn was brought back to our room, where we got some much needed rest. Only two doors down from the birthmother, we would offer to order food for her when we ordered ourselves food, and around lunchtime that day, Ravyn’s birthmother asked if we could all spend time together. She did not want to hold Ravyn, but we absolutely wanted to sit with her.

After Ravyn’s birthmother signed her parental consent, she was discharged from the hospital. We were worried she was doing “too well,” given the circumstances, but we knew she had family support when she returned home.

Jason had driven our family’s RV down to Ravyn’s birthstate, so we had our own “home” while waiting for our clearances to return home. During that time, Ravyn’s birthmother’s uncle hosted us in his home for a party so that their entire family could meet Ravyn. We knew how difficult this decision was for her family, but they also all recognized that Ravyn was going to be well cared for and loved in our home. To this day, Ravyn’s biological great-uncle is still in contact with Jason and is so thankful for every update we share with him.

Since Ravyn’s adoption, we have maintained a relationship with her birthmother. We have noticed it’s been more difficult for her the older Ravyn gets, and we always want to respect her space. We did exchange Christmas gifts with her family, and we are hoping to see her in person again in the near future. We are thankful every day for the selfless decision she made and the life we have been blessed to provide Ravyn.

Throughout our adoption, the wait seemed impossible, but keeping our schedules, vacations, and daily lives really helped us. The unknowns and not knowing what to expect was stressful, but we knew in the end it would be worth it. When we look at Ravyn, we know it was.