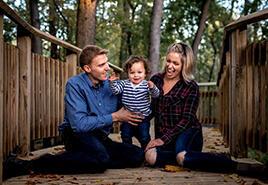 We tried for a number of years to have biological children, first on our own and later with medical intervention. Since Wes is active duty military, everytime we relocated, we had to start over with new doctors. While we were able to get pregnant a couple of times, we continued to miscarry. Becoming pregnant became all we could think about, and it was becoming very traumatic for both of us. We finally hit a point where enough was enough, and it was time to shift our focus elsewhere.

We had discussed adoption on and off throughout our infertility journey, and it was finally time to start researching. We considered all avenues of adoption—international, domestic, and foster care—but domestic infant adoption was what we were truly interested in. We continued to come across Angel during our research, and it felt like a great fit for us.

We chose not to share our adoption journey with our family right away. Through the previous years, we had gotten their hopes up so many times, and we wanted to be cautious in sharing with them another emotional journey. When we did finally share the news with them, everyone was excited and optimistic for us.

Only months after signing with Angel, our profile was selected by an expectant mother. We immediately thought, “This is it!” We were so excited and couldn’t believe how quickly it had happened. Shortly after our initial conversations with the expectant mother, we had concerns, as did Angel. We hired a social worker to meet with her in her home state, and our fears were confirmed; she had worked with a number of agencies in the past with no intent of placing for adoption.

A couple months after our first opportunity, Angel contacted us with a second opportunity, and the expectant mother was due in only six weeks. Kate, still feeling hesitant from our first opportunity, was a bit gun shy, but Wes was all in. Admittedly, after speaking with this expectant mother, this opportunity did seem more legitimate. The expectant mother had other children, she and the birthfather were going through the adoption process together, and she had a full-time job. We were able to speak with her throughout the next four weeks via text message and build a relationship. In fact, the expectant mother and Wes built a particularly strong relationship due to their career paths in the medical field. She continued to reassure us that she had every intention of placing for adoption and that while they loved their son, they were unable to provide him with the life he deserved.

About two weeks prior to her due date, we received a text message from the expectant mother that she was in labor and headed to the hospital. Kate was at work and quickly headed home to meet Wes. We had contractors at our house for a kitchen renovation, so we “hired” our neighbors to act as project managers while we headed off to meet our son. We knew we would likely miss the birth, and while that was tough, we got to the expectant mother’s birth state as quickly as we could.

We got to the hospital that same afternoon and were met by the social worker. The social worker had arranged for us to have our own room at the hospital, and we were brought there to meet our son, Crosby. It felt so surreal to be finally meeting our son, but everything we had been through up until this point had led us to him, and this was meant to be.

The first night after Crobsy was born, he shared his time between our room and his birthmother’s room. We also had the opportunity to meet her and have some genuine conversation with her. Although she and Crosby’s birthfather were placing him for adoption together, we did not have the opportunity to meet him. Since Crosby’s birth, we have remained in contact with his birthmother through emails. We still hear from her often, and while we know her choice to place for adoption was not an easy decision, we are proud to be his parents and that we have been chosen to raise him.

Our journey to Crosby was a six-year journey. At times it felt like it would never happen for us, but once we started the adoption process, it went quickly, much faster than we had anticipated. There were times during our adoption journey that were still difficult. We felt like this was happening for everyone else except us, but we knew our day would come. We are grateful every day for Crosby’s birthparents and the decision they made. Without them, we would not have known the joys of what it means to be parents.