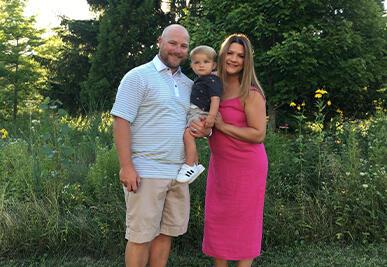 Adoption was always a part of our lives, with many family members in our lives who have been adopted. We spent four years trying to get pregnant, and unfortunately, it wasn’t meant to happen that way for us. The option of adoption was always on our minds, and we attempted to try that on our own but soon learned we needed help getting ourselves out there. After taking a break from trying to grow our family through another agency, we came upon Angel. We knew this was what we needed to give ourselves the best chance at having a family.

We went into this new journey with few expectations based on our previous experiences. After talking with everyone at Angel, though, we were just wowed with how everything was going.

Very early on, we were chosen by an expectant mother. However, the communication dropped off very quickly, and we were devastated. Based on our previous experience, we knew anything could happen, and we learned we needed to be more selective in sharing our adoption journey as it was not easy sharing the heartbreaking updates. Having to relive it over and over with each person we had to update was agony.

Then, once again, we were quickly chosen by an expectant mother who was also very inconsistent in her communication, but we were much more prepared this time. Weeks had gone by, and we did not talk. This was something we really struggled to understand, but it was just the way she communicated. We had to give up any thought of control and let the expectant mother lead us.

Trying to Make a Good Impression

It took a few weeks, but eventually the expectant mother did respond. With our previous opportunities and even with our profile, we said and did what we thought expectant mothers wanted to hear and see. Interestingly enough, this expectant mother told us she chose us because of Christina’s tattoos. It was something Christina was so nervous and hesitant to share in her profile pictures, but we left just one picture where you could see a tattoo. After talking for hours, with her asking so many great questions, she asked if we would be the ones to adopt her child! Just a few weeks later, we were told to arrive at the hospital. When we arrived, the expectant mother’s mother was there and unaware of us or any plans for adoption. We could not imagine what was going to happen. What could she possibly be going through as her daughter is in the hospital and two strangers walk in ready to adopt her grandchild? Her mother asked us many questions as we waited in the lobby to hear news of the progress.

We eventually went back to the hotel and were certain this was not going to work out. The next day, we were back at the hospital, and they ended up releasing the expectant mother after scheduling a C-section for five days later. To our surprise, the expectant mother and her mother asked that we be there for the delivery. Her mother also asked that we promise to keep in touch with her.

We went back home, taking the week off to prepare, and we were in pure panic. We did not have a nursery set up as we were too nervous to jinx anything. We cleaned the house, went food shopping, got the dogs set up, and made sure everything was set with the legal professionals.

Arriving back at the hospital, the expectant mother asked that Christina be in the delivery room with her. Christina was honored but at the same time worried since she faints at the sight of blood. Christina had never even been around babies at this point, but when our son arrived, she just fell in love. Christina was the first to hold him, and it just felt natural; he was ours. Kyle and the expectant grandmother were soon able to meet Beau as well. Kyle couldn’t help but feel like he was on cloud nine and, at the same time, wondered what in the world we just went through. It had been the most emotional rollercoaster over the last few weeks. We had been given our own room and would take turns with Beau, giving them time to be with him. Once it was time to go, we all came up with a plan to help the birthmother get back on her feet as well as how we planned to stay in touch. Turns out we now have an amazing extended family. We meet with Beau’s half-brother and grandparents every year, alternating where we visit. We also speak monthly, sharing updates and pictures, and Beau and his half-brother send each other gifts on their birthdays.

Adoption is not for the faint of heart. We had our heartbreaks and times where we felt numb, but you need to know it will happen. The lack of communication was so hard for us, leaving us questioning ourselves. We needed to learn to let go, which was very hard being detail-oriented people. We wanted to just pick up the phone and get some reassurance, but it wasn’t about us and what would make us feel better. We kept ourselves busy and went on vacations knowing we would be parents when it was time. You can’t think about the unknowns, or you will stress yourself out with something you can’t even do anything about. There will be ups and downs, but in the end, it is all worth it. Remember to just be yourself. You have no idea what will end up connecting you. Imagine if Christina had covered up those tattoos!