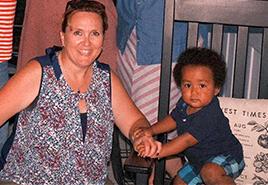 Growing up in a two-parent household, I always envisioned the same for my children. When I started to recognize that my path to motherhood might not be as traditional as I imagined, I spent well over a year researching my options. I was concerned that what I lacked without a partner would hinder my future child’s life, and I didn’t want to be selfish. While I was concerned, the desire to become a mom outweighed my worries, and once I committed myself to the adoption process, all those fears melted away.

I felt a connection to Angel quickly and really loved that they were founded by adoptive mothers and were accepting of single adoptive parents. I also knew I needed the full support of my family in order to confidently move forward with adoption. I was nervous to share such big news with them and worried they might have reservations about me being a single parent, but my parents were all in the moment I told them. My entire “village” was positive from day one, and it made jumping in much less scary.

Early in my adoption journey, I was connected with an expectant mother and had the opportunity to meet her and the expectant father. Our relationship was great, and we were really connecting. While it was emotional, I was hopeful for a successful placement so soon after starting, so it was devastating to receive the call that she had lost the baby.

After my first opportunity, I was chosen by another expectant mother, but it also did not end in a successful placement. Both Angel and the social worker warned me of their concerns, and I’m grateful I had their guidance throughout the situation.

Just as I was starting to think this may have been my sign I was not to be a mom, I was presented with one final opportunity.

Angel called to share with me that an expectant mother had chosen my profile, but they were waiting for her to meet with a social worker as she was due soon, and she had missed three separate appointments. So while I knew I had a possible opportunity, I was cautious. While at a client meeting one morning, I was contacted by the social worker saying they had finally met with the expectant mother, she was in active labor, and she wanted me in the delivery room when the baby was born.

The Most Surreal Moment

The short, one-hour drive from my client meeting to the hospital was the longest drive of my life. When I arrived at the hospital, I met with the nurse, and she confirmed that the expectant mother had requested that I be in her room with her. I was then introduced to her for the first time. We spent the next eight hours getting to know each other, and I made sure I was able to support her in any way possible. About four hours into laboring, the expectant mother had her first ultrasound of her pregnancy, and we found out together she was having a boy. I couldn’t believe I was about to have a son!

When it came time to meet my son, I was overwhelmed with emotion. Everything had happened so quickly, and it didn’t even feel as though I was adopting since I had been so focused on the expectant mother and helping her through her time of need. Meeting my son, Jackson, was surreal. I couldn’t believe he was here and earlier that day I was at a client meeting with no idea what the day would hold.

Since Jackson’s birthmother had received zero prenatal care, Jackson spent a couple days in the NICU just to make sure he was healthy. While Jackson spent time in the NICU, I spent time with both him and his birthmother. She had an opportunity to hold him and have a private moment with him, and while I was not a part of that moment, I am so thankful Jackson had time with his birthmother as we have not spoken to her since she was discharged from the hospital. It has been difficult knowing she has chosen not to have a relationship with me or Jackson, but I am open to a relationship with her in the future, if and when the time is right for her.

Coming into the adoption, I’d come to peace with the idea that I didn’t have control over this process or the expectant mother and her decisions. I kept reminding myself that when the opportunity was meant to work, it would work. Each opportunity I was presented with was so different from the others, and approaching each with empathy helped me stay grounded through the process.