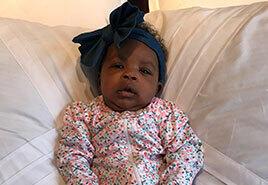 I always knew I would be a mother, but I never thought I would experience motherhood through adoption. Due to fertility issues, I’m unable to have biological children of my own. It took a few years for me to come to terms with it, but I knew I would be a mother one day. Adoption as a single parent is not as common, but as I got older, I felt stronger about being a mother, and I did not want to have any regrets.

In my late thirties, I started to research adoption and went to orientations of local agencies to see if I could find one that was a good fit. Initially I was discouraged. At every orientation seminar, I sat among traditional couples. I was the only single person in the room.

When I found Angel online, immediately, I was drawn to the website’s success stories. There were such a diverse set of adoptive parents that I felt this would be the best place for me to begin my adoption journey.

After I started my process, I wasn’t 100% confident I would be selected. After the experiences I went through with other agencies, I didn’t want to have high expectations, so I tempered my excitement.

Due to the uncertainty of the adoption process, I decided not to share my decision with a lot of people. Only my immediate family and two of my closest friends knew I had embarked on my adoption journey. They all thought I would be a great mother and were all so supportive. My mom especially was very excited for me. In retrospect, I made the right decision in keeping my plans to the people who I could really trust because the adoption process is an emotional journey.

My first connection happened three months after I signed up with Angel. This expectant mother was eight months pregnant, and we communicated well. She asked for a lot of support though, and each time, I felt like there were some things she was holding back. After I met with my social worker, I decided to step back and take a week off from communicating with her.

After that, I limited the support, and soon after, she went into labor without telling me and had the baby. I found out from her social worker she wanted to keep the baby. It seemed she only wanted the support and didn’t want to go through with the adoption all along. I wasn’t surprised. It validated all my feelings from throughout the relationship.

A Connection That Renewed My Faith

My next connection was a few months later. I spoke to the expectant mother, but she didn’t open up. I felt like she didn’t trust the process. I stuck with the process anyway and flew out to meet her. After the meeting, she informed her social worker she couldn’t go through with the adoption. I respected her decision and got closure from the relationship. I felt bad it didn’t work out, but at least she was honest and true to herself.

At this point, I felt a little discouraged. I started to doubt whether or not I would ever be a mother.

Then, a month later, I was connected to Kamiya’s birthmother. Immediately, she wanted to talk on the phone while conferencing in the birthfather. We had a great heart-to-heart phone call. The next day, she called to say she wanted to move forward.

Falling in Love with My Girl

Two days later, she called to say she was at the hospital ready to deliver. There wasn’t time for me to prepare, think, or ponder any decisions. I just booked a flight and flew to meet her at the hospital. By the time my mother and I arrived, it all felt like an out-of-body experience. We arrived at the hospital just four hours after Kamiya’s birth.

After that, everything fell into place. We went to the birthmother’s room, and the nurse brought in Kamiya. I couldn’t believe she was my baby. I didn’t want to let her go. When we finalized the initial paperwork, we checked out of the hospital with her in my arms. I thought to myself, “I can’t believe I have a baby.” I can’t explain the feeling, but it felt like this was the route I was supposed to take all along.

My family is complete, and there’s no doubt in my mind that Kamiya and I are meant to be. Many people have told me how much she looks like me. What are the chances? Many family members were really proud of me for raising a child by myself. I simply thought, “Why not me?”

After the adoption, occasionally acquaintances ask me, “Why did you choose to adopt?” I always respond, “Why not adopt?” Within my culture, people often don’t choose to go the route that I went, but that doesn’t mean that this route is not right for me.

One of the best parts of this adoption process is the people I met. People at Angel, the attorneys, and the social workers who were recommended to me were just the best. They affirmed that there are good people in the world who want to support the type of family I envisioned.

Everyone has a different journey. When yours doesn’t look like other people’s, just trust the process. The path is always uncertain, but you can choose to have faith in the fact that it will work out. The child who is right for you will show up when the timing is right.