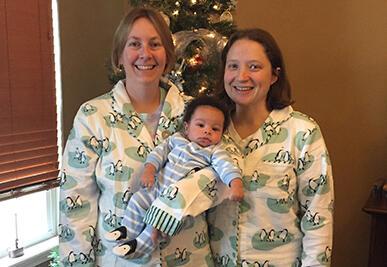 We were sitting at the dinner table, and Sara started envisioning a little mini her sitting with us. She looked over at Candice and asked, “Hey, wouldn’t you like to have a mini me running around?” Candice said “Yeah, I would!” It was at that moment we decided to take the leap and start our adoption journey together.

We really did not have any idea what we were doing or where to start because being in the military, there really is not much adoption happening. Sara talked to someone she knew who was adopted and in foster care most of his childhood. He also adopted a child with his wife. We went to the Internet like everyone does and started looking up adoption companies. Angel was one of the first companies that worked with same-sex couples without judgment or categorizing us differently than other family types. That was the beginning of our journey to Bryson.

Sara was supposed to get deployed, so we tried to rush our home study process so we could get things started prior to her leaving. The deployment got canceled, but then we were told it was back on. Ultimately Sara did not end up deploying, but that caused so many emotions while starting the process.

We have both always been private people who like to keep to ourselves. When we started our journey, we decided to not tell many people, and even the people we did decide to tell did not know the ins and outs of our journey. If we were chosen, we did not want to tell anyone because we did not want to tell them if it did not work out. Reliving the bad moments over and over did not seem like something we wanted to endure.

We waited what felt like forever, and our first opportunity did not happen until close to the end of our contract with Angel. About four months prior, we were contacted by an expectant mother. We talked for about two weeks, and things were going well. We pushed up our vacation we had planned so we would be able to take one last vacation prior to the baby being born. We did not realize we would receive some pretty bad news on that vacation.

In our state, home studies were valid for two years, but in the state where the expectant mother lived, they were only valid for one year. This was one week prior to the expectant mother’s due date. Of course we panicked and called our home study agency to see if we would be able to update the needed information in time but were told there was no way. An update would take three to four weeks, and we needed this done in one week. To say we were disappointed and heartbroken does not seem to do what we felt justice.

Here we were back to waiting, which is a place we thought we would never be again. We should have been traveling to hold our baby for the first time, but instead, we were heartbroken and wondering if adoption would ever work out for us. There was a time when we questioned whether or not we could continue because we had no idea it would hurt so bad to have something not work out.

We received another call, and we were excited again. She was going for an ultrasound the next day and wanted us to come in person. We hopped in the car and arrived four hours later. When we looked at that ultrasound screen, we saw a baby boy with a lot of hair. We could not believe what we were seeing. This moment seemed like something we had dreamed of forever, and here it was.

The Day Our World Changed

Neither of us have ever been around babies being born, so we had no idea what to expect. We were so lucky to be in the room while Bryson was born and there to support the expectant mother. We each held one of her legs, and it was life changing. I remember thinking that it didn’t matter what happened the rest of my life; seeing Bryson being born was it for us!

The birthmom wanted to hold him first, and we respected that. After holding him for a while, she then handed him to us. When we were holding him, time stopped. The world was this little boy, and he was the only thing that mattered. He was beautiful, and we were in awe of everything that had just happened. We were lucky to get pictures with the staff who all helped out delivering Bryson and pictures with his birthmom as well.

As we were all ready to leave the hospital, we asked the birthmom how she was getting home. When she told us she was going to call an Uber, we said, “Absolutely not!” We took her home, and she was able to feed Bryson one more time. When we got back into the car, we sobbed for 15 minutes because all the emotions of the past few days hit us. We loved her, and a part of us felt like we were taking him from her, but we knew she was a child herself. This was what she wanted, and it was what was best for Bryson. We were thankful, and all the emotions just hit us hard in that moment.

Looking back at the first 30 days with Bryson is a blur. Trying to sleep when he slept and remembering to shower was what our days were all about. We believe this is what parenthood is meant to be, and we are truly blessed to be parents. Every sleepless moment was worth it, and we wouldn’t trade it for anything. We are thankful we get to talk to his birthmom once in a while. We send her updates and pictures whenever she wants. She is doing amazing and has a great job. She had another son she is parenting, and their life is great. We are so proud of her!

The best advice as you are waiting is to be patient. The right child will come along at the right time. We were heartbroken after our first disruption, but now that we have Bryson, we understand why it did not work out. Bryson is for us, and it was always supposed to be him! We would have missed out on Bryson if we would have adopted the other child. Everything happens the way it’s supposed to, so be patient. We could not picture our life without him and are so in love with him. Your moment will come, and everything you went through will be worth it.