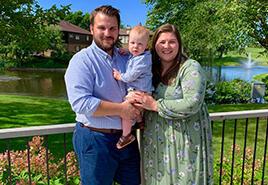 Remembering to Have Faith

After being married for a year, we decided we were ready to expand our family. We began trying to have a child, but months of trying turned into years. In total, we spent about six years trying to get pregnant. Going through this left us heartbroken because our deepest desire was to have children.

Faith is extremely important to us, so we knew God would lead us in the direction we were supposed to take. We started looking into adoption but felt a sense of fear because we did not know what the process would look like. We have heard so many misconceptions about adoption, which made us question if this was going to be the right path for us.

Being a woman and not being able to get pregnant affects you mentally as well as your self-esteem. For Ramona, knowing she was going into this journey relying on another woman to have our child took some time to digest. As women, we have the need to nurture as well as bear a child. When you are unable to do so, it weighs heavily on you.

We decided we needed to gather our thoughts and really know if adoption was going to be for us. We took a trip to Colorado, where God shed light on the adoption process and chose this path for us. When we arrived home from our trip, we started researching different adoption agencies. We started off with some agencies that would only start with a phone interview. We knew we wanted more than that, so when we found Angel Adoption and they did in-person interviews, we knew we already felt at home. Angel allowed us the freedom to ask any questions as well as eased our minds about the adoption process. They took any misconceptions we had about adoption and rebuilt our faith in adoption.

We live in a very tight-knit community, which was amazing to have during this journey. Everyone was so supportive of our decision to adopt, which made the process easier. A big part of the adoption process is the financial support. Our friends, family, and community helped us reach our financial goals. To us, that was a miracle in itself.

Embarking on Our New Journey

We were more eager than ever to start the process. When we became live on the website, we were connected with our first expectant mother. We were overjoyed with the news as we started talking with her right away. Not knowing what to expect about this process, it came to be very emotionally exhausting. With talking to our expectant mother every day, we knew we had to put aside our emotions and focus on hers.

As the months progressed, she kept assuring us she was not going to keep her child. With adoption, you have the fear of the expectant mother changing their mind and parenting. Not letting those fears hold us back, we continued on in our relationship with her.

We were ready to leave to go visit her when an overwhelming feeling filled us. We needed to know before we came that she was still planning on adoption. She assured us everything was still in place, but things made a turn for the worse. We found out the day before she was due she had decided she was going to parent. This left us completely heartbroken. Every fear we had was now coming true. Knowing we still wanted to build our family, we decided to push forward and continue with this journey. We knew there was a child out there for us, which helped us navigate through our grief.

One day another expectant mother reached out. We were extremely excited while also fearful that the same outcome would happen to us again. She reassured us she was going to follow through with adoption. Throughout the process with her, she verbalized how much she wanted us to be involved. We were extremely grateful knowing we were in this together. Throughout the months, we went to as many doctor’s appointments as possible. It was as close to bearing our own child as possible because we experienced as much of her pregnancy as we could. She put the baby and us first. She ended up being a blessing to us in so many ways we never thought were possible.

We were lucky enough to know her induction date, so we were able to prepare and plan on the arrival of our son. When we arrived in her state, we picked her up and headed to the hospital. The hospital was extremely accommodating toward us, which led us to having our own hospital room.

During her delivery, we stood by her side, cheering her on. It was such an unforgettable moment, one we will forever cherish. When Archer entered the world, Seth was able to cut the umbilical cord. Tears began flowing down our faces as we now knew God had led us to this exact moment. Allowing Archer to have time with his birthmother was scary but much needed time. There were times of doubt when we questioned if she was going to decide to parent. All of those fears were wiped away when the nurse allowed us in the nursery as we watched our little Archer receive his first bath and get his footprints.

A Moment We Will Never Forget

Before we left the hospital, we had a beautiful moment with Archer’s birthmother. In that moment, we looked over Archer as we both knew he was unconditionally loved by both of his mothers and father. Saying our goodbyes was such an emotional time. We knew in our hearts that as we gained our miracle, it became a loss for her. Our lives were now going to be filled with so much joy and love, but for her, she was going to feel a sense of loss and brokenness. We wanted to assure her that the process does not end here and wanted her to still feel connected. We agreed on sending pictures and updates throughout the year.

We found out throughout the entire process that she was starting a book for Archer, a journal to be exact. She journaled every single doctor’s appointment, giving updates on her pregnancy. She also talked about the day she chose us to be Archer’s parents. It was such an emotional moment reading through her journal because her heart and mind were set on us from day one. When we were stressed and fearful about the process, she stayed consistent.

After Archer’s first birthday, we drove up to where she lived and took her and her daughter out to lunch. We spent a few hours together where she held him and his biological sister played with him. As time progresses, we hope we can keep this tradition alive while knowing at times it can become difficult as life gets in the way. We cannot thank Archer’s birthmother enough for bringing us our miracle. She performed such a selfless act, which we will forever be grateful for. We could not have asked for a better birthmother for our child.

This Is Your Process

When going into this process, you may have preconceived notions of what you think your adoption process will look like. We are here to tell you to just let the process run its course. Be open for anything, and do not close yourself off to a potential connection, because anything can happen in adoption. If we closed ourselves off after our first expectant mother, we would not have Archer. The adoption process can be intimidating because there are so many unknowns. With that, it also makes your process so much better because it is your process, which will be unique to you. Adoption is not your standard textbook scenario, but that is what makes adoption so special and equally beautiful.

Take the first step by filling out our free adoption application today! As of August 17th we currently have 2 spots available!

Start Your Adoption Journey Today! As of August 17th we currently have 2 spots available!