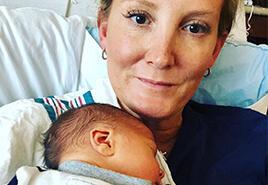 Being a single mother is not what I had planned for myself, but as most people know, life does not always go as planned.

A few years ago, I got engaged to the love of my life. We planned our future together and a big part of it was having children. We both agreed that we wanted to foster a child since he had spent some time in the foster care system himself. We were so excited to embark on this journey together.

One day, out of the blue, my fiance was diagnosed with cancer. Our world crumbled beneath our feet. As he was fighting for his life, we put our adoption plans on hold and we fought this battle together.

As the cancer progressed, he was unable to keep fighting. Sadly, he lost his fight and I lost the love of my life. I took time to grieve. It was during that grieving process when I realized that God had a different plan for me. Knowing I was still meant to be a mother, I looked into fostering a child on my own. I knew in my heart that I was not embarking on this journey alone. I had my angel watching over me.

When people talk about the foster care system, you hear all of these preconceived notions about it. Brushing them aside, I reached out to gather more information about the process.

Unfortunately, many of those perceptions of foster care became true for me. With one agency, I was told I would be contacted within 72 hours, but it took much longer than that for anyone to get back to me. I was also told that if I adopted a child through them, they would come with “baggage” and “problems.” I kept wondering why they were pushing me away from the process. All I wanted to do was to carry on the plans that my fiance and I had made together.

One night, over a glass of wine with my sister, we were talking about the struggles I was having with adopting through foster care. It was then she suggested I start looking in different directions, such as adoption agencies. Being open-minded, I took her advice and we started looking together.

Having her by my side, she became very particular about the agencies she was researching. Reading through countless comments and reviews, she came across Angel Adoption. This agency stood out to both of us. They had great reviews and their website was very welcoming. I didn’t hold back. I jumped right in and filled out an application. Within 24 hours I was able to talk to them about the process. I was overjoyed when I found out I had been accepted into their program. Just like that, I was starting my adoption process.

As the months went by, I was presented with a few different expectant mothers who wanted to communicate with me. As I talked with each one, I just found the connection was not there. Going with my instinct, I decided not to move forward with them. I knew in my heart they were not the expectant mothers for me.

As I was going through all these emotional times, I started to wonder if it was actually going to happen for me. Being a single parent and embarking on this process, you hear so many comments about how single parents cannot adopt. Fortunately, I had an angel above who helped me push through those negative thoughts and gave me the strength to keep going.

It was then I connected with Johnny’s birthmother. She had started talking with another family, but when she found out they could not assist her financially, she chose to communicate with me instead. Angel presented me with the opportunity and I happily accepted. I started talking with her right away.

Through our conversations, we became quite close. She had compassion and sympathy for my story, and she knew what it was like to lose someone close to her because her father had passed away. We connected on a deeper level as we both knew we had our angels guiding us from above.

As time passed, we continued to talk almost daily. Talking with her throughout the week helped bring my anxiety down and put my mind at ease about the process. When the Covid-19 pandemic hit, it put a damper on our plans. I was supposed to fly out to one of her doctor’s appointments, but all flights were getting cancelled. I was very disappointed about the situation, but I knew she would be sending me updates as well as pictures and videos of the baby. When I opened my phone to an ultrasound video, I was able to see my son moving. In that moment, this whole journey became real.

One day, my expectant mother called to let me know she was going to have her baby that night. Shock filled by body and my mind raced. I immediately called my sister to tell her the great news. I was feeling every emotion there was. She was going to the hospital with me for support, which I was so grateful for. We ended up driving through the night. When we arrived the following morning, our expectant mother was still in labor. We decided to go to the hotel to get some rest as we knew my life was soon going to change forever.

Arriving at the hospital was such a surreal, overwhelming feeling. My expectant mother was gracious enough to allow both me and my sister to be with her in the delivery room. Although we were able to virtually meet throughout the process, seeing and meeting each other in person was so much more than I could have imagined.

As she began to push, my sister and I were right by her side, holding her legs and cheering her along. As the labor progressed, some challenges arose. Our little Johnny became stuck and his umbilical cord was wrapped around his neck two times. Chaos filled the hospital room and fear filled our minds. I remember looking at my sister with complete fear. All I wanted was Johnny to be alright. Luckily, a screaming cry filled the room as he finally made his entrance into the world. He was going to be just fine!

As Johnny recovered, I was able to see and hold him. I was in complete awe over this tiny human. All of the fears melted away and I knew I had just gained my other half. When Johnny and I locked eyes for the first time, I knew in my heart that my angel above guided me to this exact moment. My heart was finally complete.

Johnny’s birthmother and I have a semi-open adoption. This allows me to send her pictures and updates of Johnny. It is such a great experience because as Johnny continues to grow, so does my relationship with her. We have connected and built a relationship that I will forever be grateful for. She is such a remarkable person and words cannot describe how blessed I am to have had her by my side throughout this journey. I cannot thank her enough for believing in me as a single parent as well as my story. I owe everything to her for allowing me to bring Johnny home.

In the future, as life settles down, I want to become an advocate for adoption. I would love to help flatten some of the creases that go on throughout the process. I want to share my story and let other single parents know that everything you may hear about adopting on your own is a complete myth. I am living proof that this process can work for us. There may have been bumps in the road, but here I am holding my precious Johnny. Without this process, and all the struggles I went through, it would not have led me to this moment.

When life kicks you down, get back up and fight. Lean on your friends and family for support. At a glance, it may seem like you are doing this on your own, but in reality you have a whole support system cheering you on. Keep fighting and be patient because the end result is more than words can describe.