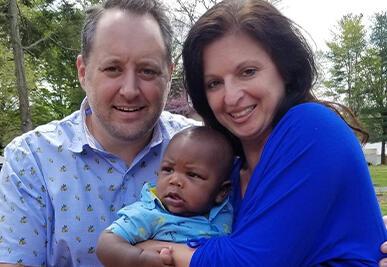 On our very first date, we talked about adoption together. Jake’s sister was adopted from South Korea, and adoption was something Lisa’s family seriously considered. We were both drawn to the process and loved the idea of growing our family that way.

After trying for children naturally with no success, we knew it was time to start looking into adoption. We first found Angel prior to being married, and after our initial conversation, we knew we wanted to complete the home study and get married first.

Without our family fully understanding how serious we were about adoption, we secretly started the home study, and after being engaged for six months, we convinced our families to join us for a beach vacation and surprised them with a wedding on day three of our trip! Everyone was shocked, not just by the wedding but to learn that we had already started the adoption process. As shocked as they were, they were equally as thrilled and excited for us.

With our marriage license in hand, we mailed in our final piece of paperwork for our home study and officially joined Angel’s program. We had done so much adoption work already without people knowing that it was an exhilarating time to share with everyone and a relief to check off that final box.

After being in Angel’s program for about eight months, our profile was chosen for the first time. Our profile had been selected just before the Fourth of July weekend, and we were headed out of town to an area with horrible service. We were so anxious all weekend that our texts wouldn’t go through and she would think we were ignoring her, which wasn’t the case at all! We learned she was a younger mother to two children already. We ended up speaking with her for about two months before she ultimately chose to parent.

About one week later, our profile was chosen a second time, and this time around, we only spoke with the expectant mother a handful of times before she stopped communicating with us. We knew the expectant father was involved, and we believe they chose to parent together.

Not long after our second opportunity, our profile was chosen again. It was amazing how we went almost a full year without being selected and we had now been selected three times back to back. She was the first expectant mother that we had spoken to on the phone before, and our conversation went really well. She opened up about herself and shared with us that she had two children she was parenting and one child she had placed for adoption previously. She hadn’t found out she was pregnant until her second trimester, and the birthfather was unknown.

Only a couple weeks after our first conversation, we flew down to her home state to meet her. Our weekend together was short, but it was well spent. We really connected with her and even talked about keeping the relationship open in the future so her kids could know their sibling.

After returning home from a great weekend, we found out our profile was selected again by an expectant mother having twins. While we were interested, we felt like we had formed such a strong bond with the other expectant mother, and we didn’t want to jeopardize what we had going already. We communicated to the expectant mother and told her we had been selected again, but we were fully committed to her if she was to us. She was due in three months, and we knew in our hearts that this felt right. Thankfully for us, the expectant mother was under the impression that she had already officially chosen us, telling us, “Oh no, you’re mine!” and we explained that she needed to communicate that to Angel herself.

The very next day, she spoke with her coordinator, and we were officially connected. The months following our connection were uneventful and smooth sailing. We continued to stay in contact and started to prepare for travel.

One morning, about one week before Thanksgiving, Jake called Lisa in a panic, asking if she had “seen the text.” Lisa had not, which explained her calm state, but that quickly changed when she learned the expectant mother was in labor and that we had to leave ASAP. Her due date was not for another three and a half weeks, so we were not prepared. Jake rushed home, and we packed as fast as we could, booked a new Airbnb, and started the twelve-hour drive to the expectant mother with our bulldog in tow.

The hospital had released the expectant mother to go home and labor longer, but she returned less than two days later to deliver her son. Due to strict COVID protocols, we were not allowed at the hospital with her or our son, Harrisson. It was impossible to sit at our Airbnb waiting for the news when Harrisson would be released to us. Harrisson’s birthmother was discharged after only 24 hours, having had Harrisson in her care the entire time. Lisa was able to speak with a nurse on the phone the same day, and we received approval for him to be discharged to us the following day.

The morning of National Adoption Day, we headed to the hospital, and picked Harrisson up. The hospital staff brought him out in his car seat, confirmed our IDs, clipped him into our car, and sent us on our way. It wasn’t until about fifteen minutes later that we got to our Airbnb and truly met our son, Harrisson, for the first time. After not being able to participate in his birth or meet him immediately, it felt surreal that this tiny baby was ours.

While in Harrisson’s birth state, we did not have an opportunity to see his birthmother, but we were in contact with her constantly. When we returned home, we mailed her Harrisson’s baby hat and crib card from the hospital as well as a small bracelet for her with Harrisson’s birth stone in it. Our adoption was, on paper, a closed adoption, but we all felt it was important to stay in each other’s lives for her two children she was parenting.

Throughout the first year of Harrisson’s life, we stayed in close contact with his birthmother, exchanging hundreds of text messages with each other. She was the first person we shared a video with when Harrisson hit a new milestone, and we loved seeing Harrisson’s siblings grow up as well. Devastatingly, just months after Harrisson turned one, we learned his birthmother passed away. Through her passing, we lost contact with her other children as we never had a relationship with her extended family. We, along with our parents, helped cover her funeral expenses. We could not imagine Harrisson’s biological family not having the proper closure and not having her with them.

As devastated as we were to lose her from our lives and from Harrisson’s life, we found a software that has allowed us to download our text messages with her and turn them into a book. We are so grateful to have this small piece of her to live on in our lives and in Harrisson’s life. We hope that as he grows older, this will bring him peace, knowledge, and closure knowing his birthmother loved him through her very last days.