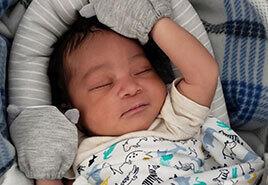 We got married in our late thirties, and due to an unexpected military deployment, we had to postpone the family we so wanted to start. Once back home and after months of trying, we found out we couldn’t have kids naturally. To say we were both extremely disappointed is an understatement, and we needed time to grieve. At this point, we were unsure on how to proceed. For a good part of the next year, we secretly grieved and became distant. Not wanting to give up on the possibility of somehow having children of our own, we sat down and had a very long discussion. Once we were truly honest with one another regarding our feelings and wanting a family, we were finally on the same page and knew the next step was to look at the possibility of adoption.

We took the advice of a coworker and his wife who had adopted five children. We researched adoption agencies. There were quite a lot to choose from, so we met with an amazing local adoption lawyer who pointed us in the right direction. Once you find an agency, the pre-adoption process can be overwhelming with filling out paperwork, background checks, creating a profile, etc., but when that’s all completed and a birthmother chooses you, you soon realize it was all worth it. We were actually connected to a birthmother pretty quickly. We were able to meet her prior to the birth. She was and is truly a wonderful person. Our adoption process was really straightforward and all parties involved were in agreement on the relationships we wanted to have with each other moving forward. This adoption went smoothly due to having a great relationship with the birth mother and our caseworker.

Six years have passed and we know how blessed we’ve been and the joys our little girl has brought to our lives, but we always knew we wanted our daughter to have a sibling. We had already decided we wanted to add another child to our family. When our daughter was just over four years old, we sat down and discussed this with her, asking her if she would be okay with another baby girl or boy in the house. (Having seen Frozen way too many times, she was bent on having a baby sister.) One day she came home from school and made the statement that she wanted lighter skin. She was different from the other kids who had lighter skin. Our hearts ached, and we told her God made her just the way she’s supposed to be and that her darker skin is beautiful and every person is created differently. After that incident, as we were still in the process of filling out paperwork for a second adoption, we secretly hoped we would be connected with a birthmother who had a similar ethnicity as our daughter’s so her sibling would look similar to her and could share the same experiences.

In the beginning of the second adoption process, we were excited to go on the journey again due to our first time being so smooth, and we were hopeful that this time would be the same but knew it could take more time.

It seems God has a way of evening things out. It ended up taking us almost two years before getting connected to a birthmother. Unfortunately, this one didn’t work out. Within the next ten months we would be connected to four more birthmothers, with three again not working out. No matter how right the connections felt, for one reason or another, they fell through. The fourth connection hit us the hardest. After the birthmother chose us, we tried to stay in constant communication with her. It was difficult because she would only text, and her responses would come several days later. Also, on multiple occasions, she canceled the scheduled social worker appointments that were needed to move forward with the adoption. As her due date got closer, she finally did meet with the social worker, and we got to meet her in person. The luncheon went well.

The following day the social worker called to let us know the birthmother had requested help with her finances. Since it appeared everything was moving forward, we decided to assist her. Approximately two weeks later, the birthmother was being induced. The day before, she texted giving us the time of the expected birth. We drove to the hospital, four hours away, and waited outside of the delivery area…and waited. By mid-afternoon, without any communication, we were finally informed she had decided to keep her baby.

We were devastated. After being so close to having this baby, how could we allow ourselves to go through this over and over again? Donald did not want to try again. He was “done.” Although just as disappointed, Lisa couldn’t give up. She didn’t want this adoption process to end this way. She wanted to at least try, giving us until the end of the year for a possible connection.

We decided to go on vacation to help us process what had just happened and to give us time to think. Lisa wrote a long letter to Angel with everything we felt during this process. We were heartbroken and needed our frustrations to be heard. The last line of the letter said, “We don’t have time for someone to keep us waiting and then decide to change their minds. We need someone who is 99% sure of their decision.”

Right after we came back from vacation, we got a call from Angel. We had another connection.

The expectant mother was almost due, and she had already picked us. When Lisa got the phone call, she wasn’t sure what to tell Donald. She ultimately decided to say, “We have to at least try one more time.” If God was presenting this opportunity so quickly, shouldn’t we at least try?

We agreed to wait and see how this connection would play out. We are so glad we did. The birthmother was so sweet. She let us know she had a job and her own insurance. We knew she didn’t need financial support. She wanted to also let us know she had a little girl and boy with the same birthfather of her unborn baby but that he was not involved with any of the children.

Due to certain recent circumstances, she just wasn’t going to be able to take care of this new baby. She was very firm on how she wanted the best for her child and that’s why she went the adoption route. We talked several days per week leading up to the birth. This connection felt right, and she was genuinely sincere with everything she said to us. This gave us hope.

The Delivery That Reaffirmed Our Faith

Immediately when she went into labor, she called to let us know, and shortly after midnight, she called again to let us know she had just given birth to our baby boy. We were so elated and informed her we’d be on our way. We arrived at the hospital several hours later to finally meet her and our baby. It was such an amazing experience. We talked for quite some time. She even joked that she thought she was having twins because the baby seemed so big. But when she delivered him, he was only six pounds. When we saw her holding the baby, it was such a beautiful moment. We captured it with a picture so we could show our baby when he gets older how much he was loved. She then gave him to Lisa to hold. It was an incredible feeling and instant love.

We stayed and talked for another hour as we got to know her more. Then we left to go to our hotel room so she could get some rest. We also wanted her to have time with him that night.

Due to the state laws, we had to stay for two weeks while all the paperwork was signed. During our stay, we were able to keep baby Jackson in the hotel room with us. While we waited, we made it a point to spend time with his birthmother. She is truly an amazing person. We really came to love her and informed her that she and her two children were now and forever a part of our family. We talk about twice a week and try to keep in touch as much as possible. We are now hoping to plan a trip to see her later this year.

We Have Him Now

When we brought Jackson home, our daughter was so excited! Her first words were “His skin is just like mine.” That warmed our hearts. We knew we had found the right baby and were connected to the right birthmother. It was the connection we always wanted. Our daughter just adores her baby brother. When the two of them are together, we marvel at how similar they look. If people didn’t know our situation, they’d think they are biological siblings.

With two kids at home, our life is so full, but we are still recovering emotionally from our adoption experience. It takes a while to heal. But we are determined to stay physically fit and healthy so we are able to take care of our children. We have such laughter in the house. Every day we remind ourselves of what we overcame and how strong we are, how blessed we are.