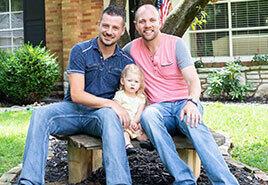 At our wedding four years ago, we announced to friends and family we had started the adoption process. Angel was one of the local partners we found. They were very quick to respond and walk us through the process. We honestly did not interview another organization because they were so great from the beginning. We did not want to work with anyone else.

We were very nervous and excited as we really did not know what to expect. At times, while we were waiting for all the initial connections to be made, it was nerve wracking and scary to think about what could happen. Each time the phone rang or an email would arrive, we thought this could be the call or email that changed our life. Thankfully, our large network of friends and amazingly supporting family were there for us every step of the way.

Unexpected Connection After a Long Wait

We had a couple of initial opportunities that simply did not work out. Luckily, we did not have to travel anywhere to meet expectant mothers for those opportunities. For one reason or another, these situations just seemed like they were not going to work out. We didn’t lose faith or hope though; they were just hiccups in our story.

We got a letter from Angel asking us what we were planning on doing once our contract expired since there was no placement and our time was coming to an end. The very next day we got an email stating a birthmother wanted to connect with us, and it all became so real from that moment. Two weeks later we were headed to Texas to meet with Kennedy’s family, and then, less than a month later, she was in our arms.

We spent the last two weeks of her pregnancy with Kennedy’s mom and family before she gave birth, and we received a call from Kennedy’s birthmom that it was time and we should meet her at the hospital. She could tell something was wrong, so her birth plan was completely changed and she had to do an emergency C-section as Kennedy was not moving. She was born and moved into the NICU to be put on preventative antibiotics for strep, but otherwise, she was perfect. We were supposed to be in the delivery room, but with last-minute changes and the scare, we waited next door in the waiting room while she gave birth to Kennedy with her own mother in her room. We ended up staying down in Texas for over a month to work with ICPC, to visit the NICU, and to wait out a hurricane.

Immediately after Kennedy was born, her birthmother sent us a picture from the delivery room. As adoptive parents, we had limited rights at the hospital before paperwork was finalized, so the hospital had a hard time knowing what to do in this situation. We tried to educate them and use our social worker as much as possible, but states vary in limitations, so we had to abide by their rules. Luckily, we had some amazing nurses who understood our situation and were very friendly and kind to us.

It all happened so fast. We thought we would have Kennedy in our arms, but instead we were waiting to see her; the first time we saw her was in the NICU.

After we got back to our hotel and the paperwork was signed, we held Kennedy in our arms. This was the moment everything felt real, and we knew the three of us were about to start our amazing life as a family.

Our adoption process really tested us. There were so many unpredictable moments. From the beginning, we knew we had to let go of expectations and our perfect image of pregnancy, delivery, and connection with the birthmother. We kept saying to ourselves, “Keep an open mind. It’s not going to go exactly the way you imagined, so just let go.”

Through these moments, our marriage not only survived but thrived. We can offset each other’s temperaments to pull each other through the emotional hurdles. It truly is a life-changing process that can test everything in you.

But the greatest lesson we learned through this process is simply to genuinely connect with the birthmother. Whenever we felt self-conscious of the “wrong things to say,” we switched gears and focused on the connection with the birthmother. When we got to know her, our perceptions of the situation changed. We have a closed adoption, but we knew our efforts connecting with her were still worthwhile. Through asking her a lot of questions, we could understand her side of the story better, and this ultimately led to better decisions on our part.