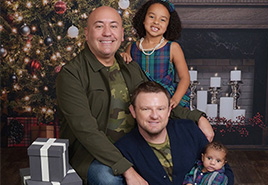 The Journey of a Lifetime

We could never have imagined we would be where we are now, with two beautiful children and living the life of our dreams. When we began dating and growing closer as a couple, we discussed all the many things we would do with our future children. After marrying in 2013, little did we know our baby girl, Kennedy, would be joining our family in just a few short months. When researching where to start on our adoption journey, we came across Angel Adoptions. We were drawn to the diversity among the adoptive families and the close-knit family feel of Angel Adoptions.

We were not prepared for the whirlwind of events that occurred once we signed on with Angel. We had barely gotten our profile out before we received a phone call that a birthmother was interested in speaking with us. We were thrilled to learn she was due soon and had chosen us in full confidence. She was excited to share her pregnancy journey with us, and we spoke often through texts and phone calls. When the day came for her to give birth, we were at the hospital anxiously awaiting the arrival of our daughter. We had the deep honor of witnessing the birth of our beautiful daughter and cutting her umbilical cord. The three days after she was born were such an emotional time. Seeing her for the first time, it felt like our hearts were going to explode. Meeting this precious baby and then knowing she wasn't yet ours until papers were signed weighed heavily on us. The birthmother requested to keep baby Kennedy in her room with her during that time, and we were so scared she was going to change her mind. She did end up signing, however, and we were able to spend more time with her before traveling back home. Being able to share that experience with her and bond with her is something we are so grateful for. We still talk often and continue to share pictures and keep her updated as Kenendy grows.

When Kennedy was 11 months old, we went to live overseas for two years as Cullen attended medical school. We knew we wanted to have more children, so within six months of returning to the United States, we once again reached out to Angel Adoptions to pursue adoption.

We knew that every journey is unique and different, and this time was proof of that. We weren’t truly prepared for the time of waiting we would face. About nine months into our journey, we connected with a birthmother. We were excited, and so was Kennedy. Unfortunately, that birthmother changed her mind three days before her due date. Though we did our best to understand, it was hard to explain to Kennedy, who was waiting to be a big sister.

About nine months later, we received a call from Angel staff, who wanted to know if we were interested in a quick adoption. The birthmother was due in six weeks, so we began speaking right away through text, and within a few days, she let us know she wanted to move forward with lawyers and that we were her family. In the next few weeks, we found out she was having a boy, and we were over-the-moon excited. As we strolled through our local farmers market, we received a phone call from our birthmother; she was on her way to the hospital due to her water breaking. We were on a flight within hours and hoped we would get to the hospital before our son was born. Once we got to the hospital, we finally were able to meet her and spend an hour with her as she labored. She wanted to meet Kennedy, who had drawn her a picture and was so excited to give it to her. As we closed our eyes to get some much needed sleep, hospital staff woke us to let us know it was time and that our son would be born any moment. Witnessing Beckett’s birth was an incredible experience and one that fills our hearts with immense joy. Cullen was able to cut the umbilical cord, and we did skin to skin immediately as we took in those first few moments of this new life.

Watching as Kennedy met her brother, Beckett, was incredibly breathtaking and a moment we won’t ever forget. She is so in love with her baby brother and is an amazing big sister, always wanting to help.

Each journey is so very different, and we didn't understand that for ourselves until we experienced two very different adoption journeys. Each one came with unique challenges, and each one brought us different lessons. What we found most challenging was all the moments of waiting. Trusting and keeping faith in the process, even when things were seemingly falling apart, was hard. Each and every moment was worth it, though, as we now feel like our family is complete. We could not have gotten to where we are without the loving support of family and friends. We feel surrounding yourself with a strong support system can make all the difference in how you experience life, and having them there when things fell apart was a blessing. Life with our two beautiful children is busy, and we are overjoyed to be able to witness these two grow before our eyes.

Take the first step by filling out our free adoption application today! As of February 20th we currently have 3 spots available!

Start Your Adoption Journey Today! As of February 20th we currently have 3 spots available!