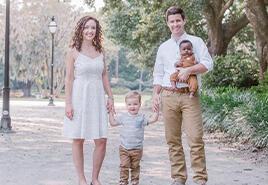 After having our biological son, Cooper, with a high-risk pregnancy for Chelsey, we knew we had some decisions to make. We knew we could have another child, but we also knew the risks were high. We considered both surrogacy and adoption and found adoption was a better fit for us. After researching a number of adoption providers and feeling as though we weren’t going to find the right partnership, we found Angel. We appreciated how focused Angel was on both adoptive parents and birthparents since it was important to us that birthparents felt cared for as well. As we began our journey with Angel, we were excited to see what this journey would hold.

Just as the expectant mother was getting comfortable in her third trimester, she lost the baby. We were all devastated. After this traumatic turn of events, we chose to pause our time with Angel. We knew we were not emotionally prepared to work with another expectant mother and wanted to be able to fully commit to the next expectant mother who chose us.

After taking just a couple months to ourselves, we were ready to start the process again. Shortly after our profile went live, we were selected by another expectant mother, who thought she was in her second trimester. After a doctor’s appointment and finding out that she was still in her first trimester, she shared with us her plans to terminate the pregnancy. Coming into this proces, we had been prepared for disruptions, but we had only thought about a disruption if an expectant mother chose to parent; we had never considered the chance of a miscarriage or termination. Both of these, back to back, rocked us a bit; they both required us to recognize how much of this process was outside of our control and how even though we believed we were prepared, we could not have possibly prepared for every imaginable scenario.

The day she chose to terminate her pregnancy, Angel contacted us with a new opportunity with a young expectant mother. The expectant mother was interested in an open adoption and had viewed profiles of families who lived in her state. It just so happened that we lived in the same city as she did. As we started to get to know her, her intentions, and her dreams, we couldn’t help but feel connected. We found out her mom and grandma were both supporting her through her decision, and that felt very reassuring to us.

As we were getting to know the new expectant mother, the previous one reached out to us and let us know she chose not to terminate her pregnancy and still wanted us to move forward with adoption. We were grateful she reached back out to us, but after considering the two women and the relationships we had formed, we felt the younger expectant mother was a better fit for us and ultimately chose to work exclusively with her.

Due to our close proximity to the expectant mother, we were able to meet her and her family in person a number of times. The first time we met, we spent the afternoon walking around a park together, getting to know each other and connecting on a deeper level. Chelsey had the opportunity to attend a number of doctor appointments with the expectant mother, and we felt so honored she was choosing to share so much with us.

As her due date approached, we slept with our phones on every night. We knew she preferred that her mom be with her at the hospital, but since her mom might not be able to be there, Chelsey was her second choice. On the only night in two weeks that Chelsey didn’t sleep with her phone ringer on, the expectant mother went into labor. Her grandma took her to the hospital and was able to be her support person through labor and delivery.

We were not able to meet the baby until the day he was discharged, but we look at those days he spent with his birthmother in the hospital as a blessing. We knew those were days they would never get back and that what was our greatest day was a day rooted in loss for her. When we did get to meet our son, Edwin, we were overjoyed. We felt so honored we were chosen to be his parents and that Edwin’s birthmother was trusting us with such a monumental role.

Our open adoption with Edwin’s birthmother has been so special to us. We agreed to a communication plan, but we have deviated from it very comfortably. We have been able to visit with her and her family a couple of times and stayed in communication through texting. We are always sure to be mindful of how she’s feeling and what emotions she may be going through, but we love that she has remained a part of our lives.

Edwin’s birthmother has been the biggest blessing to us, and she helped us complete our family. We feel honored we are also able to support her goals and dreams and cannot wait for Edwin to watch his birthmother grow as a young woman.

We never imagined adoption would be part of our lives, and we now know we never could have fully prepared for the path ahead. We found ourselves having to be open to any scenario and were building relationships with women our lives typically never would have crossed with. Our ability to be flexible and understanding carried us a long way through our experiences, and ultimately, letting go of control is what brought us to our son Edwin.