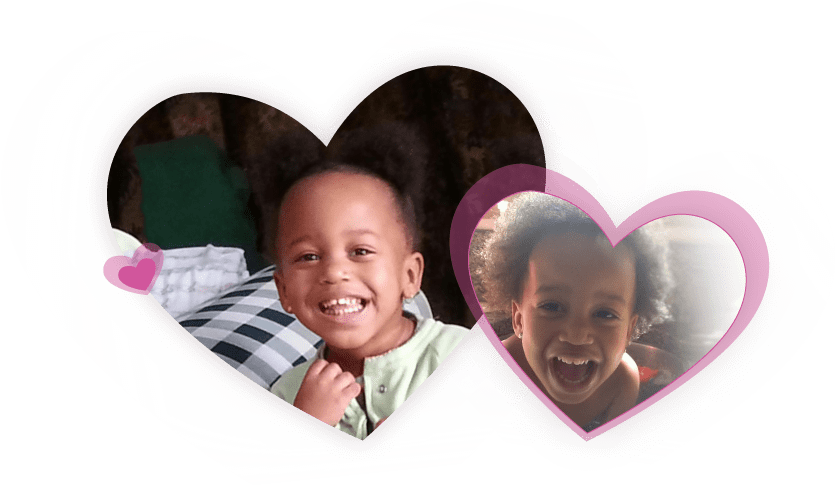 When did you adopt:

She was born January 7, 2012. We got her at two days old. We flew down to Atlanta, Georgia two years ago. She is a little over two years old and her name is Georgia!

We adopted 20 years ago through the state. And then we decided to do it again 15 years later. I was bored and I needed another baby to love. So I went to the state and we had a little girl and a little boy. We had the girl for two and a half years and the boy for three years and they were both given back to the parents - after that long of time so it was heartbreaking. So we decided to go through an agency. A lot of agencies wouldn’t take us because at that point we had just turned 50, both my husband and I, and a lot of places wouldn’t take us. So we searched and searched and then we found Angel and we were thrilled!

My husband went on Better Business Bureau to make sure it was legit. Because you just never know what you’re doing. It’s another state... and you just dont know. So we looked into that, and then we started talking to Stephanie. Everybody was so nice over there, too. So it was easy. They made it easy. That’s important.

The biggest challenges were not getting your hopes up. You talk to a parent, and the minute you talk to a perspective mom you have your whole life planned out with that child and then it falls through sometimes. And it’s a little bit heartbreaking. But, you just move on because it’s not meant to be. There’s another baby out there that’s meant for you!

Just the fact that it could fall apart at the last minute.

The smell of a baby.

Most of them 20 years ago were against it. They were all worried that you just don’t know someone else’s problems. But, we did it anyway and everyone is in love with both kids - my 20 year old and my 2 year old.

Okay. We really didn't care either way. But it happened to be a closed adoption.

She was in next room at the hospital when we were there and she sent us a note - a very nice note. But we never actually met her.

Adopting a baby can be a lengthy process - how did you get through the wait?

Basically, I want to say right away we started talking to a mom. And that was for like four months. And then it didn’t happen. She changed her mind. So then, maybe a couple of more months went by and we talked to another mom. And that didn’t work out. And then a third mom...we flew to Georgia to meet her and everything because she wanted to meet us. It ended up that she had connected with another family months and months ago through another agency and things got all mixed up. The other family had paid for a hotel room for her. Because they had done that it was a binding kind of contract. I don’t know what happened but that didn’t go through either. So really, the time went by because we kept talking to different mothers. It wasn’t like a long drawn out quiet time, no.

First of all, we had just found out that this girl had picked us. And she wasn’t due for another couple of months. And we had a cruise planned for myself and my extended family. There were like nine of us going on a cruise. So, Angel had said “when you come back we will get you the particulars on the mom and all the background stuff.” So we really didn’t even have a background on her. We were coming home on the bus after the cruise. We all turned our cell phones off on the cruise. They told us ‘don’t leave it on, you’ll get charged...blah blah.’ So we shut them off. So we’re on the bus to come home and we all turned our phones on. And my husband says ‘Oh I got a lot of messages and calls from Angel Adoption.’ So we called and they said “You have to get to Atlanta, Georgia!” She was born six or eight weeks early - the baby. So she had already been born and she was already a day old. So we get home, we unpacked, we repacked, and at 5 o’clock in the morning we were back on a plane to Atlanta, Georgia to see the baby. So it was a whirlwind. It was wonderful. It was wonderful. It was the only time we weren’t really thinking about it. All of the other times it’s in the back of your head. This was the one time we weren’t even expecting it.

Oh god. She was beautiful. And tiny, tiny. It took a couple of hours but the hospital was great. They let us in the room. The lawyer who Angel hooked us up with met us there at the hospital. She was in the room. She was going back and forth making sure that everything was good while we were just taking in this little, tiny... she was just 5 pounds. This beautiful, little baby.

My only advice is be patient. It will work out. As down as you get, the happiness that happens when you do find the right one is wonderful. It’s worth all the ups and downs that you go through.