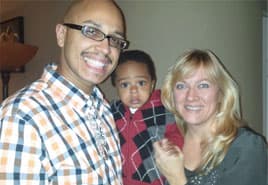 Before and after we got married we decided to try and add to our family. Because of my age we didn’t have a whole lot of luck. After fertility treatments ranging from vitamins and acupuncture...I tried to persuade David about adoption. I knew from having nieces and nephews that I did not have to birth a child in order to love him or her. David met several people through his job who had adopted. After talking with different people who we knew had adopted, some had suggested Angel Adoption. We did our background research and called Angel and thought it would be a good fit for us.

It was mostly recommendations from other people who had worked with Angel. Also the fact that Angel works with Lutheran Child and Family Services. They are the ones who do the approval process as far as the state licensing. We weren’t necessarily locked in with one agency in case we decided to go with another one or go with more than just Angel. It’s a lot of money and faith to put into one place. We wanted to keep our options open just in case. Everything worked out very well though...obviously!

The homestudy process. There were times that I thought that we were done and then found out that we weren’t done. You find out you might have to take some more classes. Trying to fit that in along with everyday life was hard. If that was my only job I would have finished a lot of things sooner. The process of getting recommendations from people, the classes...even at the last classes I thought that we done and then they said ‘oh no, there is another class that we want you to take.’

We were always nervous firstly about whether or not we were going to get picked. You don’t have control over that. And then once you are picked, are they going to follow through with it? The first one that picked us was very set in her decision. Her family persuaded her to change her mind. With our son, we Skyped with the birthmom. She asked us if we had his room ready. We had a crib but it was still in the box when she gave birth. We didn’t want to get our hopes up. Anything can happen. We didn’t want to be set up for possible disappointment.

Just having this new little person in our lives. Having him enrich our lives. Once you have a child your life is never the same.

They responded very positively. I was 45 by the time we adopted. I have tons of nieces and nephews who are older because my siblings started having kids in their 20s. They were all very excited about having a new generation. And now my nieces are all having babies so we will have a whole new generation of kids around the same age which is wonderful!

Open is strongly encouraged. We were a little wary about it. It’s hard because you have a birthmom and you have an adopted mom. Who is your “real” mom quote on quote. In one of the adoption classes there was a girl there and she was about 12. Her birthfather would come to her house every weekend. Sometimes she gets confused. She points to the birthfather and says ‘he’s my dad’ and then points to her adoptive father and says ‘he’s my dad, too.’ We wanted to do what the birthmother was comfortable with. She initially said no to open adoption but that she may change her mind.

We got the call from the birthmom. She went into labor so we got plane tickets. Then they told us it was false labor and they discharged her so we canceled our flight. She called us the next day and said ‘it’s for real this time.’ It was a bit of controlled panic. There were a lot of arrangements to make with work and booking a flight. Friends and family stepped up to help us. We got there 12 hours after she gave birth.

I was a little nervous. She gave birth around noon. They let us come to the hospital even though it was 1 o’clock in the morning. It was a little uncomfortable but she was like, “here he is!” David held him first. I didn’t want to break him, haha. She let us name him. I had to stay in the hospital for two days because they couldn’t release him. The birthmom came back and we let her have one on one time with him.

We let her steer the boat as far as what she wanted to do. A couple of days after we left the hospital she asked us if she could take him to meet a few of her teachers at school. So we picked her up and went to her college with her and she showed him off! We have kept in touch with her. At first she was texting fairly often. It has dwindled but my husband is Facebook friends with her. She sees pictures but we haven’t communicated with her since January. I think she has moved on.

How did you get through the waiting process?

We had faith that we were likeable, nice people. We had faith that someone would pick us. You never know what the birthmother and birthfather are looking for. We were confident that we would find the right fit.

Take the first step by filling out our free adoption application today! As of January 23rd we currently have 4 spots available!

Start Your Adoption Journey Today! As of January 23rd we currently have 4 spots available!