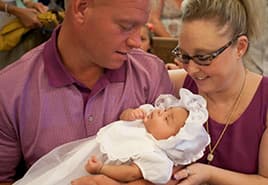 My husband and I tried for approximately six years to conceive when finally we decided we were not meant to have a baby that way. We were meant to adopt. I was adopted and after trying hard still to no avail, we decided to give a baby that already was in existence a better life.

We chose to work with Angel because of their high percentage of success with adoption and the support they give to couples along the way. The only thing I wish was that there was a way to take out some of the risk involved.

We were most excited about starting our life with our new daughter or son—whichever was intended for us to have. It turned out to be a beautiful baby girl.

I was most nervous about the birthmother and all of the what-ifs. It can be a very trying time, but it can also be a very good time depending on the birthmother and her situation. I learned that, in a way, you are going through what they go through during that time period due to your love for the child, even though you have not even met him or her yet.

They were excited but leary about all of the information that we were getting at the time, but they all hoped for the best and supported us every step of the way.

What was it like meeting the birthmother for the first time?

Because of her location, we did not meet her until the date of delivery. I felt as though I knew her, though, having been in communication with her for so long. It was scary and unnerving, but exciting at the same time.

Describe receiving the call that your baby was being born and traveling to meet her.

We didn't get a call, instead we got a text from the birthmother informing us that she thought she was going into labor and she was going to the hospital to check. We didn’t actually see the text until the following day. At that time, I was unable to reach the birthmother and tried to call the hospital several times. Unfortunately, even though you are the potential adoptive parent of a baby, at the time of birth, nothing has been signed and the hospital will not tell you anything. We finally figured out that the birthmother was in post-pardum recovery, so we threw everything in the car and drove eight hours to get there.

At this time, I have sent pictures and a few emails and texts with updates, but I have not heard anything from her since she said goodbye to us when we left the state.

All of the unknowns and people not being able to definitively tell you something and give you a straight answer. It was difficult when people didn’t give you all of the information upfront, only exactly what you asked for and nothing more, even though they may have known more than they were telling you.

Adopting a baby can be a lengthy process - how did you get through the wait?

I am not sure to be honest. It was lengthy, but I just stayed positive and hopeful. I knew this is what we were meant to do. We were led on this path and this journey for a reason.

Take the first step by filling out our free adoption application today! As of January 18th we currently have 4 spots available!

Start Your Adoption Journey Today! As of January 18th we currently have 4 spots available!