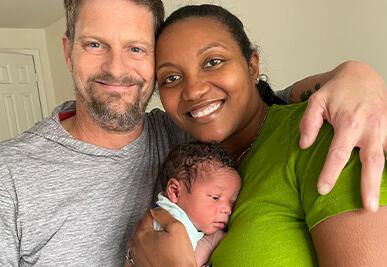 On our very first date, we both shared with each other that we were adopted. As we talked more about our adoption stories, we found out we were born at the same hospital just years apart and that we both had adopted siblings. After getting married and discussing having a family, adoption was the only choice for us. Adoption is a process so close to our hearts and our families. We could not imagine having children any other way.

After our first conversation with Angel, we knew we had found our place. We loved how accepting they are of all types of families and felt at home immediately. As we started our profile, we also started researching the home study extensively. We found that by calling multiple home study providers and asking the right questions, we were able to hire the most affordable social worker and pay the best price for our required classes. We knew adoption was going to be an expensive process, and by doing a little bit of research up front, we were able to save ourselves some money in the long run.

Only one month into our profile being active, we received our first call that an expectant mother had selected our profile. It was surreal that it was happening already! We spoke with the expectant mother regularly and found out while she was early in her pregnancy that she was having twins. The expectant mother was receiving regular prenatal care, and her doctor had voiced concern about the risks to her health of carrying the twins to full term. Shortly after, we believe she lost both babies as we never heard from her again. Although we only spent a couple weeks speaking with the expectant mother, we had grown close and were looking forward to the possibility of parenting twins.

It was difficult to disrupt the opportunity and potential adoption. We knew the expectant mother was still considering adoption, and we wanted to continue to do right by both her and her child, but we also were not prepared to fight the expectant father if he truly wanted to parent. We knew he had rights as well, and it was important to us to respect his rights.

Only weeks after we were advised to walk away from our second opportunity and just days before Christmas, we were contacted with a third opportunity. We had the chance to text with the expectant mother, and then, the day after Christmas, we spoke on the phone with her. Adrienne and the expectant mother had an instant connection, and it felt like this was someone we could truly be friends with. There was an age difference and an obvious circumstance difference, but we still clicked.

The expectant mother was already in her third trimester and already knew she was having a boy. She and the expectant father were together and had two children together. This time, he was fully on board with the adoption plan. She had not told anyone other than her mom and best friend about her pregnancy or adoption, so she centered her life around work and caring for her kids.

Through our many conversations, she told us firmly that she wanted a closed adoption. We hadn’t expected this, but we started to frame our mindset around losing this relationship after the baby was born. It was difficult to imagine because we had grown so close, but we were ready to respect her wishes.

The Opportunity of a Lifetime

The expectant mother was scheduled to be induced on a Monday, so we, along with Adrienne’s mom, drove eight hours south to where she lived the Saturday before. Adrienne and the expectant mother spent Sunday having a girl’s day, getting their nails done and having lunch together. It was during their girl time together that the expectant mother started to express doubts about having a closed adoption. We had always told her we were open to more and supportive of her choice, and we had already talked about spending time together when we came back for finalization. We were excited at the prospect of having more of a relationship after the baby was born.

Monday night we met the expectant mother at the hospital and we were given our own room two doors down from her room. Adrienne was asked to be the expectant mother’s support person, and after 24 hours in labor, our son, Garner Joseph Elijah, was born. Garner’s middle name, Elijah, was given to him by his birthmother, and we believe it fits him perfectly.

After Adrienne cut the umbilical cord, Garner was brought to our room so that Eric could meet him and we could do skin to skin. We are grateful for the opportunity of a lifetime to have been there for our son’s birth and to spend every moment with him. We know this is not an opportunity all adoptive parents receive, and we will never take it for granted how much his birthmother considered us during her labor.

Garner’s birthmother was unsure if she would want to meet him, and we gave her the space she needed. The day after Garner was born, his birthmother did choose to meet and hold him. It was such a special day for all of us as it was Adrienne’s mom’s birthday as well. When we weren’t spending time with Garner’s birthmother, she was being supported by the amazing hospital staff. One of the nurses herself was a birthmother, and she formed a really special connection with Garner’s birthmother. She was able to speak with her in a way that we weren’t and was such a ray of light. We had another nurse who was a foster parent and going through an adoption as well; the love she showed us was beyond what we could have ever imagined.

Garner’s birth really brought adoption full circle for us, from our own births and adoptions to his with a staff that had a heart for adoption as well.

After Garner’s birthmother was discharged, she and Garner’s birthfather signed over their parental consents at the attorney’s office. When we texted with her to check in, she told us again that she was having doubts about choosing a closed adoption. She was already missing Garner and was dreading the idea that he may not know her. We told her we were hoping she would want to be more involved and would love to have her in our lives. We are excited to share updates with her and hopefully allow Garner and his biological siblings to have a relationship as they grow up.

After our first opportunity, we learned to “hold our cards” closer. We had shared with our extended family and friends about our adoption, and when it disrupted, we had to share with them the devastating news. It became important to us to share only what we were comfortable sharing and with whom we were comfortable sharing. We also learned it was okay to grieve the disruptions.

Our families were always supportive of adoption and were a huge support system to us throughout our own adoption journey. This process would have been immensely more difficult without leaning on them and each other.

The adoption process does not come without a rollercoaster of emotions, but the love we have for Garner made every difficult decision and moment worth it.