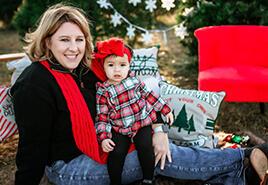 I always knew I wanted to be a mom; it was just a matter of life’s timing as to when it would happen. I had always discussed with my mom that if I was not a mom by 35, I was going to sit down and consider my path to motherhood. After my mom passed away just one year after I turned 35, I knew it was time to make a plan.

I had friends who worked in the Department of Family Services, and I believed that as a single mother, I was not going to be able to provide the necessary care for a foster child. I briefly considered fertility options but never felt as though it was a great fit. I had volunteered in orphanages in high school and college and felt a strong calling to adoption. As I researched domestic adoption, I was hit with roadblocks due to being single. It was important to me to work with a provider that was open to all types of families.

From my first conversation with Angel, it felt like a great fit. The staff was reassuring and calming, and they connected me with a phenomenal home study provider in my home state. I was so anxious about interviewing and having a stranger in my home, but after only ten minutes with my social worker, we felt like old friends, and I was comfortable sharing with her. Both Angel and my social worker helped prepare and educate me on how long the wait could be, so after my profile was completed, I did just that—I waited.

Less than six months after joining Angel’s program, I missed a call from an Illinois number. I knew very few people with Illinois numbers and immediately thought, “Could it be Angel?” I was mid-meeting and could not answer but listened to the voicemail as soon as possible. My profile had been selected by an expectant mother; was I interested in the opportunity? I started crying while simultaneously coming up with one thousand questions. After speaking with Angel and composing myself, I sent the expectant mother an introductory text message. I knew she was a younger expectant mother, and I figured texting would be most comfortable for her. The expectant mother and I spent several weeks texting with each other, and I allowed her to lead as much as possible. She opened up to me about her relationship with the expectant father. He was young as well and supported adoption; her mom also supported her decision to place this child for adoption.

Prior to delivery, we had one visit together that was not centered around a doctor’s appointment. The expectant mother and father asked to come to my home to see where their child was going to be raised. I was open to having them in my home as I wanted them to be as comfortable as possible with the choice they were making. We ended up being able to spend one weekend together, hanging out at my house and then visiting the local zoo. We had discussed an open adoption post-placement, but I wasn’t sure if they would follow through, so I was happy to host them for the weekend to help reassure them.

About three weeks before the expectant mother’s due date, she texted to let me know she was having contractions and headed to the hospital. Being her first pregnancy, we weren’t sure if this was “real,” so I headed down to be with her and the expectant father. The doctors were able to stop her labor, but we also found out she was having some medical complications. After further understanding the medical concerns and what might be attributing to it, I invited the expectant mother and her mom to stay with me in my hotel for some much needed comfort and rest. The expectant mother and her mom stayed with me for two days, and I headed home after one week in her city. We knew delivery was close, and I had things I wanted to be sure were ready at home.

Only two weeks after I returned home, I went back to the expectant mother’s city for her induction. She had not originally planned on an induction, but her doctor knew how important it was to everyone that I be able to be there for the birth, and this was a guaranteed way to make that possible. The day of induction, the expectant mother, father, her mother, and I all headed to the hospital and started the delivery process together. It was not until the evening that my daughter, Emersyn Elaine, was born. I was able to be present in the room, along with her birthfather. I was the one to cut the umbilical cord and first hold her before handing her to her birthmother.

The evening Emersyn was born, she spent the night with me in a room right next to her birthparents. The following morning, her birthparents asked to spend time with her, and when I brought her in, they were honest with me that they were reconsidering adoption. I was shell-shocked. From an emotional standpoint, I wanted to run out with my daughter and never look back; however, logically I knew I had to allow them their space to learn what it meant to be a parent. I left Emersyn with her birthparents that morning and would not see her again for almost 24 hours. That entire day, the nursing staff kept me updated and reassured me that they were making sure Emersyn was cared for.

It was difficult to remain cautiously excited. The birthparents were young, and while I knew I could care for Emersyn and provide her the life they were hoping for her, I also knew they had to ultimately see that for themselves; this was not a decision anyone could make for them. That day, it was almost impossible to balance the emotions of what I so badly wanted and what was right, which was giving Emersyn’s birthparents the freedom to make their choice.

The following morning, while Emersyn was still with her birthparents, I was blessed with a nurse who shared with me his adoption experience that he and his partner went through to become dads. It was so reassuring to hear some of the struggles they faced but also that he recognized some signs in Emersyn’s birthparents that they might actually be leaning toward adoption. I also spoke with the birthmother’s father, and he shared with me that he knew his daughter and the birthfather needed to choose adoption. Unfortunately, while I agreed with him, we both knew this was still their choice to make. Her father shared with me their concerns about our open adoption agreement, and I knew that if we had a chance to speak, I would likely be able to calm their fears.

Over our long conversation, I reassured Emersyn’s birthparents that I had zero intention of taking her from them and them never being involved in her life. I wanted them to be able to watch her grow and succeed, and I wanted Emersyn to know her birthfamily, her story. We agreed during that conversation to set up their first visit to come see her only weeks after I returned home.

Not long after our conversation, both of Emersyn’s birthparents signed their consent paperwork, and Emersyn and I were discharged together to head home. After the emotional 24 hours I had been through, it felt like heaven leaving the hospital with my daughter.

Since Emersyn’s birth, we have seen both her birthparents a number of times. They were both able to attend her birthday parties, and it is so special to me that they are still wanting to be active in her life. I cannot imagine a world in which Emersyn will not benefit from the relationship we have with her birthparents. I have the utmost respect for Emersyn’s birth parents and the decision they made for their daughter. I see so much of them every day in her, and I know I would miss out on those moments if we did not have the relationship that we do.

Coming into adoption, I made myself a list of what I could and could not control. This list helped to ground me when I was having moments of fear or anxiety, since oftentimes what I was worried about was something I could not control. My support system also helped ground me but also celebrated with me!

The adoption process and my journey to motherhood would not have been possible without everyone I met every step of the way and my existing support system. The love Emersyn has around her is overwhelming in the best way possible, and parenting her is my greatest joy.