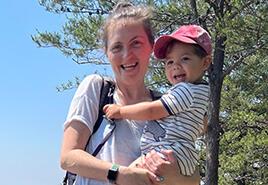 Adoption is not new to my family. My cousin was adopted, so adoption was not a foreign idea growing up. I also had some close friends who were adopted. A few years ago, I was in a secure place in my life and was ready to start my own family. The only thing was that I was single. Despite that, I knew it was the right time for my road to motherhood to begin, so I started looking into adoption. I was super grateful for the opportunity and ready to get started.

When my family found out about my decision to pursue adoption, I was greeted with nothing but resounding support and excitement. I come from a very large family! My siblings knew pretty much from the start when I started looking into adoption and when I signed on. After that, I slowly let the rest of my family know the exciting news.

My first adoption opportunity was when a friend of a friend unexpectedly became pregnant and she was considering me to adopt the baby. Unfortunately, it didn’t work out, and it was heartbreaking. Instead of this situation deterring me from continuing with adoption, it grounded me and showed me that this was meant to be my path. It provided another layer of confidence. I was never more sure of my decision to adopt. I took the time that I needed to process and then started to research different adoption agencies. What stood out to me most about Angel was that they had a lot of support for members of the LGBTQ community and for single moms, which was something I was looking for. The fact that Angel works with families and expectant mothers across the country was also something great to see.

Starting my journey, I was extremely nervous, but also excited. My take on adoption was that I would be opening my heart to a lot of unknowns and likely a lot that may be tough to handle. But isn’t that what parenthood is? Taking this idea and being strong in all of it, I knew that I was not nervous about my decision, but about what lay ahead. I knew this was the best decision, but the what-ifs can be difficult for anybody.

One of the most helpful parts of starting off with Angel were the calls with my adoptive parent coordinator. I always felt that anytime I had a question it could be answered, and the calls I had were very informative. I also loved knowing that the Angel staff was just as concerned for the birthmother’s well-being and that she had a coordinator just like I did. I leaned on my support system with my family a lot, but I really utilized Angel as well.

My Lucky One and Only Opportunity

I was thankful to have such a great one and only opportunity with my son’s birthmother. I was open to whatever type of communication she wanted and was totally on board with following her lead. When we first started talking, we were texting every day getting to know each other. I was beyond excited when she picked me to talk with as she was the first birthmother I had ever spoken to!

My son’s birthmother was towards the end of her pregnancy when we started talking and she just had a few months left. We had only been talking for just a few days when I received the call that she had chosen me to create an adoption plan with. I was overjoyed! My communication continued with her through the few months until she gave birth and I met her in person for the first time when she was at the hospital in labor. Our connection grew very strong during these moments at the hospital and it was such a blessing to be there with her.

A Surprise Change of Plans

Leading up to the birth of my son, Vincent, one of his birthmother's biggest fears was that she would go into labor before I got there. Her doctor suggested she set an induction date so I would be able to be there. Once I heard she was on board, I went ahead and booked a flight. At the last ultrasound before the induction, we found out the baby’s movement had slowed down, so she was sent to the hospital. Thankfully, both the birthmother and Vincent were fine, but they decided they needed to move up the induction date. Once I was notified of this, I changed my flight and flew out that very night!

“It was sacred and surreal and slow and fast all at the same time.”

I arrived very late that night. Thankfully, my mother came with me for support because baby Vincent took his time making it into the world — she was in labor for over a day! I was able to be there with her the entire time until Vincent made his arrival. It was sacred and surreal and slow and fast all at the same time. At one point we were bouncing on yoga balls and eating and then all of a sudden the nurse was yelling that she needed more help! The time I spent with my son’s birthmother during this time was so special, and I will always treasure it. I held her hand while she gave birth, and it was truly an incredible experience.

Vincent’s birthmother wanted me and Vincent in the nursery together right away after he was born. The nurses kept saying to me, “Let’s go Kate,” but I was feeling so torn about leaving this amazing woman in the room by herself. Thankfully, she had a friend there with her for support. It was difficult at the moment, but I knew that was what she wanted.

Being in the nursery room with Vincent was amazing. We never left each other's side from the moment he was born. We did skin-to-skin contact and I fed him a bottle and boy he was hungry! It was so perfect to just hold him close. The first time that I held him, I had never felt more right and at home.

The hospital we were at plays a lullaby across all departments when a baby is born. My mom had heard the lullaby in the waiting room and smiled knowing that baby Vincent had arrived. I was able to be in this great room where my mom was able to eventually make her way. Vincent’s birthmother and her friend were able to come into the room and spend some time with us as well.

Vincent’s birthmother had said from the start that she wanted a closed adoption. At the beginning it was very open and I just continued to follow her lead on what she was comfortable with. We texted pretty often the first month after Vincent was born. She wouldn’t ask about Vincent directly, instead more about how I was doing as a mom. Her communication then dropped off to around once a month, and then she would only reach out around the holidays. At this point, I haven’t heard from her in a while. I could tell that this drifting of communication was what she wanted and needed. This was what was most comfortable for her.

Vincent just turned two and he is doing so great. I can honestly say it has been the fastest two years of my life. He is an absolute lover boy! He was born with a full head of hair and two years later he still has the same beautiful hair. He was just a peanut when he was born, but he is a big guy now. Watching him become a person has truly been wonderful. It has certainly been a learning process, becoming more impatient and more patient at the same time. He is a big cuddler who loves to kiss and hug, and he is just so funny! Vincent is currently going to daycare during the week right down the road from where I work. When I come to the door to pick him up each day, he screams my name and basically knocks other kids down in his excitement.

Being Prepared for the Journey

My biggest challenge in the adoption process was finances. I was super fortunate to have family support, but it is just an expensive process to be prepared for. I wanted to make sure I was ready to do the right thing with all of the expenses that would come along. Between the legal fees and expectant mother support, I wanted to be prepared and be able to support a birthmother. Although my wait time was short, that time was also a challenge. I have all the compassion in the world for those who wait a long period of time for their miracle.

I was certainly blessed with my situation. Vincent’s birthmother was very clear and transparent with me and there was no wavering, so I didn’t have to wait through a lot of uncertainty. I was prepared to respect any birthmother that may waver in her decision, but she was very set in her choice. She knew this was right for her and her baby before I even started communicating with her.

Going into adoption, I had always thought it was how I wanted to build my family. It was my heart's desire to have a sibling for my child as well, so I absolutely want to adopt again! It is very important for me to have siblings for my children as my bond with my siblings was so strong and valuable to me. Now it is all about figuring out the best time for me to begin. It is also important for me to make sure I am financially stable enough to adopt a second child. I know that a bumpy road can be a big part of the adoption journey, and I am prepared and excited for what my next chapter will bring!

Love and Care for Her

My advice to other adoptive parents is to remind yourself that you are not going crazy — it is so hard to not be in control. Also, it is so important to care for your child’s birthmother. That is probably the most important piece. I thought to myself, how are you going to explain how you felt about Vincent’s birthmother? I know I can tell him how much I loved her and cared for her the same that I care for him. He will always know how much I cared for her. She is a piece of him, and I cherish the miracle she gave to me.