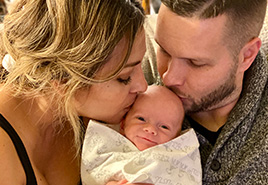 We knew we wanted children and never imagined we would have any difficulty growing our family. After years of trying and a few rounds of IVF with no success, we were feeling defeated and heartbroken. We began looking into other options, and we came across Angel Adoption while doing our research. We loved that Angel is a national company that has worked with birthmothers and adoptive parents all over the United States. Working with Angel just felt right. It felt easy, and it was definitely the path for us.

When we made the decision to sign on with Angel, we were met with extremely overwhelming emotions, but at the same time, we were also so excited. We knew that within a two-year period we had an excellent chance of becoming parents, and we tried our best to not let any of the doubts creep in and overtake us. We stayed organized and on top of all the paperwork involved. Angel staff was very helpful with the check-in calls and encouragement and reassurance. They played an intricate role in us remaining calm and pacing ourselves when we became overwhelmed.

The Rollercoaster Ride of a Lifetime

Not long into our journey, we received a call a birthmother was interested in speaking with us. We were so excited and yet nervous as we didn’t know what to expect. The birthmother wanted to text, and we obliged, moved forward with hiring services on her behalf after a few months even though something felt off about this for us. When the lawyers attempted to reach her to meet in person, they were unable to get ahold of her, and we never heard from her again. We were emotionally invested but also knew to keep our hearts protected should this situation arise. Although experiencing this was not fun, it was a beautiful lesson and teacher for us to remain trusting and to guard our hearts at the same time.

A few months later, in early August of 2019, we received another call from Angel staff letting us know a birthmother had chosen us and wanted to talk. We spoke with her on the phone, and from the beginning, it just felt right. We spoke with ease, and she had a lot of really great questions for us. She was unsure of how far along she was in her pregnancy, but after seeing a doctor, we came to find out she was 26 weeks along. We were overjoyed when she showed us the ultrasound, and as we continued to talk, we felt at ease with our connection.

We could have never prepared ourselves for the phone call we received late one night while relaxing. We received a call that let us know the baby had decided to make an early appearance and that she had given birth at home; they were now on their way to the hospital. Our hearts and stomachs dropped as thoughts of concern for the health of the baby and mother filled our minds. We were happy to learn baby and mom were doing well at that moment and there was no immediate cause for concern. We called our attorney for advice on what to do and were told to call the birthmother back and ask if she wanted us to come, which she absolutely did. The birthmother then notified all staff that we were coming and this child would be placed with us. The hospital staff was amazing and kept us informed as soon as we arrived at the hospital. They treated us as if we were another couple there giving birth.

Due to being born 8 weeks early, we were discouraged from moving forward with adoption due to the high-risk nature of a premature baby and the lengthy stay in the NICU. The moment we walked in and saw our child, our precious baby boy, Aidan, we knew he was ours and we wouldn't leave his side, regardless of any medical or unforeseen complications. We are happy to report Aidan is a beautiful and healthy baby and was released from the NICU after 29 days.

We are overwhelmed with immense joy for the way things played out and how blessed we are to have a healthy baby boy in our arms and in our home. Aidan is healthy and continues to gain weight and grow before our eyes. We finalized his adoption on December 5 and cannot believe we get to enjoy being parents this holiday season, so much sooner than we ever expected. We knew this would be an overwhelming journey but never expected to face the emotional challenges we did. No matter how much you read, you cannot prepare for the balancing act of working with a birthmother. Wanting to honor the selfless act of Aidan’s birthmother and her desire for an open adoption, while also trying to find a healthy boundary to have our opportunity to bond with him, proved to be harder than we imagined. We continue to keep an open dialogue, and we check in with her every few weeks.

Though there is so much you cannot control within an adoption journey, we would say to try to be patient and have faith in the process. It will happen at the right time for you. Staying mentally focused on a positive outcome will relieve feelings of frustration. Lean on each other and family for support, knowing it truly does take a village. We are so excited to continue adding to our family through the adoption process, should the opportunity arise.

Take the first step by filling out our free adoption application today! As of April 8th we currently have 2 spots available!

Start Your Adoption Journey Today! As of April 8th we currently have 2 spots available!