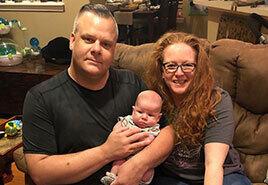 We have been married for eight years. Three years ago, we found out we could not have biological children. That was a disappointment, but we both felt strongly about having a child, so we began to investigate different options. We started first by fostering a child with the intention to adopt. A 22-day-old baby boy was placed with us. We bonded with him, and he became our pride and joy. He was with us for eight months when his aunt came forward to care for him. Our hearts were broken, and it was a very difficult time for us. We decided that we would not foster again but rather would commit to an adoption plan. We are very spiritual people and believe in trusting the universe. We felt that when the time was right, we would become parents.

What brought us to Angel Adoption was their success rate for placements. We were still nervous, though, when we started because of all the unknowns. Would a birthmother pick us? When would that happen? What if she changed her mind? All these questions swirled around with no real answers; however, we knew we wanted to open ourselves up to the journey that lay ahead. Once we had signed with Angel Adoption, we shared our profile with our friends and family, and everyone was ecstatic for us.

Our profile went live not long after we started the process. Ten short days later, we received news an expectant mother wanted to begin conversing with us. She was talking with other couples as well. We talked on the phone and began texting multiple times a day. Three days later, the birthmom told Angel she wanted to pick us to connect with. From that point on, the birthmother and Mindy would talk multiple times a day via text. She was in her early twenties, and texting was the most comfortable way for her to communicate. We talked about everything: our families, our communities, what we liked and disliked, and what we were watching on Netflix. We truly formed a friendship. Then it was time to meet in person. We met the birthmother and birthfather as well as their daughter. That day started with nervous anxiety and ended with a confirmation that this was the best choice for everyone.

Since we had connected early in the birthmother’s first trimester, we went through the entire pregnancy with her. At times it felt almost more like a surrogacy than an adoption. The birthmother sent updates on each doctor’s visit. She sent each sonogram. She asked us if we had picked a name, and when we shared that with her, she began referring to the baby by his name, Ronin. As we got later in the pregnancy, she would FaceTime us from the doctor appointments, and we would talk with the doctor as well. The baby was set to be born via C-section, but two weeks before that, we were with her via FaceTime when she went for a routine check and we all learned the news together that Ronin would be born that day.

Brett had just had back surgery, but Mindy already had a bag packed, just in case, and she grabbed it and headed to the airport as the birthmother lived in another state. She arrived after our son’s birth, but when she saw him, she immediately burst into happy tears. It was so emotionally overwhelming and very difficult to describe, but she knew the instant she looked at him that this was our son and this was meant to be. There was an immediate connection.

It is amazing how our connection through Angel Adoption changed how both of our families viewed this adoption. The birthmother had started out wanting a closed adoption and we wanted a semi-closed or closed adoption, but that changed for both families after we got to know each other. Spending eight and a half months getting to know these remarkable, generous people felt like an expansion of our family. By the time we were finalizing the adoption, both parties agreed that an open adoption was for us. We even became Facebook friends.

Authenticity Made All the Difference

Our attorney said to us, “I don’t think I’ve ever felt more comfortable about an adoption before.” We couldn’t agree more. Being connected to Ronin’s birthmom and the ease with which we moved through all the processes of the adoption truly felt like we hit the jackpot.

Be your authentic self during your engagement with expectant mothers. We were honest to a fault about who we were and what kind of life the baby would have. She shared with us that she selected us because she felt we were being genuine and honest with her and weren’t just telling her what she wanted to hear. This is why she felt she could trust us. Second, use your support system. We set up a private group on Facebook and invited our friends and family to join. We have over 300 members, and we shared everything with this group. We created a safe place to share our feelings and emotions, and this support continues to mean the world to us. Finally, and most importantly, trust that the universe will bring your family together at exactly the right moment.