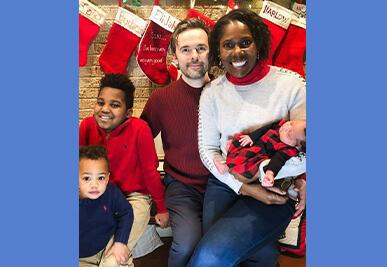 Coming into our marriage, Lois had two children already. We dreamed of having children together one day, and after years of infertility struggles and many rounds of IVF, both while stationed overseas and stateside, we turned to adoption.

We adopted our first son, Benji, while living on the East Coast. We worked with a local adoption agency and had a wonderful experience. Once we moved to the Midwest, we knew it was time to start exploring adoption again and started working with another local agency.

Many of the opportunities offered to us were either the wrong fit or were financially out of our budget. As the years rolled by with the local agency, we knew we needed a fresh start and to expand our exposure. We found Angel and really liked that they worked at a national level and we weren’t going to be as limited.

Finding the Right One

While working with Angel, we had a number of opportunities with expectant mothers. Many of them were younger and really friendly. We were really able to help educate some of them about adoption and parenthood, and although they ultimately chose not to place, we kept in touch with them.

As we got closer to the end of our two years with Angel, we were starting to panic, but they continued to keep us calm and reassure us that the right expectant mother was out there for us.

Not long after, our profile was chosen by an expectant mother in her third trimester. As we got to know her further, she was incredibly honest and up front with us about her story, history, and choices. Lois and she had many late night conversations talking about everything and nothing at the same time. We felt so secure with her, and although we had some residual fear that she might choose to parent, she continued to reassure us that she wasn’t going to and that we needed to trust her.

About one week before her due date, while at a family party, the expectant mother went into labor. Her mother called Lois to tell her the news, and Lois immediately started looking at flights. We had originally ordered her an Uber to the hospital, but when we realized just how quickly the baby was coming, we called the ambulance instead.

After a long night of speaking with the birthmother on the phone after her delivery, the following morning, we flew to the birthmother’s state to meet our newest family member, Elijah. We had decided on his name with his birthmother months prior. When Lois arrived at the hospital, we found out there were some minor medical concerns with Elijah. The attorney continued to reassure us that things would be okay and that we should still meet Elijah. We spent time that day with Elijah’s birthmother and her mom as well, and it truly felt like family.

When Elijah’s birthmother was approved to leave the hospital, Lois gave her a ride home. During the car ride, she mentioned how difficult of a time she was having and that it felt like losing a family member. Lois continued to remind her that we and Elijah were still here and that she was welcome to stay in his life however she felt comfortable. We had every intention of seeing our open adoption through.

As promised, we stayed in contact with Elijah’s birthmother by sending her picture updates. As time went on, she was a bit more removed, but she always came back around. Just before Elijah turned two, his birthmother reached out letting us know she was pregnant again. Based on our previous two years together, we knew she was not in a position to parent this child. We gently asked her what her plan was, and she asked if we would be willing to adopt this baby as well. Without hesitation, we said yes.

She was in her third trimester, so we knew we only had weeks before another baby joined our family. We started updating our home study and hired her an attorney in her state. Only weeks later, Lois received a call from Elijah’s birthmother that her water had broken, and we told her she needed to head to the hospital. She reassured us she felt okay, and while we were still concerned, we couldn’t do much from states away. Lois started looking at plane tickets while trying to get ahold of Elijah’s birthmother.

Finally, at 6 a.m. the following morning, Lois answered a call, and all she heard was a screaming baby. When she was finally able to understand what was happening, we found out the birthmother had had her daughter at home and the ambulance was there to take them both to the hospital.

That evening, Lois arrived at the hospital, this time alone due to COVID restrictions, and saw Elijah’s birthmother for the first time in almost two years. Lois met our daughter, Madeline, for the first time. Once again, Lois came up with Madeline’s name with her birthmother. The following morning, when Lois returned to the hospital, we found out there were similar medical concerns with Madeline as there were with Elijah. This time, we were unfazed and had no hesitations in moving forward with her adoption.

While waiting to return home with Madeline, Lois was able to take her to meet her biological grandma, who had met Elijah as well. Once officially home, Madeline got to meet her big brothers and dad, and she truly felt like the piece of our family we did not know we were missing.

Since Madeline’s adoption, we have continued to maintain contact with our kids’ birthmother. She holds such a special place in our home. We understand that her life has not always been easy, and we are grateful she has trusted us twice to raise her children.

Adoption has touched our home more than once, and we are forever grateful to our children’s birthmothers for giving us the greatest gifts we could ever ask for. Without either of those women, our family would not be what we are today.