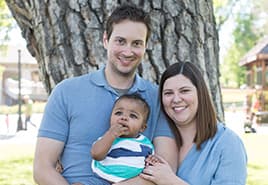 We had been married for a couple of years and were ready to start a family. When we found out that we couldn’t conceive we decided adoption was the right path for us.

We did quite a bit of research and communicated with a couple of different agencies. We chose Angel because we loved that they didn’t take an infinite number of adoptive parents, so it seemed like they really focused on finding everyone a match. We also liked the al a carte approach to the financial part of it. It made the financial part more manageable during the process. Angel also sends out quite a bit of information, which includes a list of references. We reached out to a couple dozen of them and everyone spoke so highly of Angel.

What were you the most excited about?

We were most excited about starting a family.

What were you the most nervous about?

We were most nervous about not being connected and then the possibility of it falling through.

The best way to describe it was cautiously optimistic. Everyone was very supportive, but didn’t overtly show their excitement. We think it was like that because they feared the potential downside for us.

What was it like meeting the birthmother for the first time?

We took the birthparents to dinner and spent hours talking. We honestly didn’t talk much about the adoption; we all just shared stories from our lives and got to know each other. We all had an instant connection. On our way home from dinner, the birthmother texted us and said they wanted us to adopt their baby.

Did you choose an open or closed adoption? How did you make that decision?

Describe receiving the call that your baby was being born and traveling to meet him.

We were only a couple of hours away from the birth family so we had been fortunate enough to participate in doctor appointments. We had been there Friday for an appointment and then on Sunday she had her six-year-old son call us and say the baby was coming. We drove a couple of hours and got there. She was delivering him at a military hospital, so there were a few extra things we had to do to get to the hospital. We were very nervous and excited all at the same time.

Wonderful and overwhelming. Our birthmother had gone into labor on Sunday, but our son didn’t come until an emergency C-section Wednesday night. When our son came out, they rushed him to the NICU because he had a fever and our birthmother was rushed somewhere else. We remember hearing him loudly cry, but didn’t see him. We were quite scared for him and our birthmother. Finally we were able to go into the NICU to see him. We couldn’t hold him, but got to hold his hand and see him. It seemed surreal. They made us leave, but the next morning we got to hold and feed him. It was one of the happiest moments of our lives. We were instantly in love and bonded with him.

We text and send pictures every few weeks. We have also met up with the birth family once when our son was almost eight months old. We have plans to meet up again in the next month or so. We have told them we are open to meeting up on a regular basis, but let them drive that.

Initially the biggest challenge was the financial part of the adoption. We did a huge garage sale and pancake breakfast fundraisers and that helped. We also did odd and end part-time jobs on top of our full-time jobs. We were very committed to our adoption. The other challenge we faced was actually when our birthmother went into labor. The labor was not easy and she was in labor for over 72 hours. Everyone was extra stressed. Then the hospital where our son was born was on a military base, so there was an extra layer of things we had to do to get on and off base.

Adoption can be a lengthy process — how did you get through it?

We were very lucky that our adoption wasn’t lengthy. We started working with Angel in March, our birthmother chose us in August, and our son was born at the end of November. Between everything we tried to keep ourselves busy by doing baby and nursery preparation.

Would you adopt again? Why or why not?

We will always remain open to the idea, but right now we are very happy and loving the life we have built with our son.

We say stay busy during the process and try to keep normalcy. It is okay to be beyond happy and scared at the same time; just try to stay calm. Also, be 100% yourself with the birthmother. It forms a more genuine bond.

Take the first step by filling out our free adoption application today! As of April 6th we currently have 2 spots available!

Start Your Adoption Journey Today! As of April 6th we currently have 2 spots available!