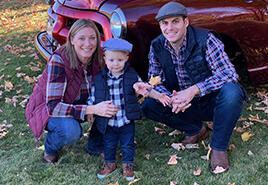 After five years of infertility and rounds of IUI and IVF, we paused family planning to focus on ourselves. We knew we wanted to be parents, but we needed to give ourselves some breathing room. It was during that time that we started considering adoption and researching the different avenues. We considered international, domestic, and foster care and ultimately found domestic adoption to be the best fit for our family.

We found Angel online and really connected with their founder’s stories. The staff was so welcoming! We had met with another domestic adoption provider, and it never felt right. Angel was the opposite of that.

While excited, we knew to keep realistic expectations. It had taken years to get to this point, and we knew adoption was not a sure thing. We had faced only failure up until now, and we wanted to remain grounded while also hopeful.

Not long after starting with Angel, we got our first call that our profile had been chosen. We were both excited and nervous. We could almost feel our hearts beating out of our chests as we sent the first “hello” text message. We spent four months getting to know the expectant mother and building a strong connection. Slowly, our strong connection started to feel off. The expectant mother started to pull away from us and was posting about her pregnancy on her social media. It was becoming clear to us that she was starting to get attached to the pregnancy, which we knew was a risk, but it didn’t make it hurt any less. It felt like a slow breakup, and we were seeing the end coming quickly. When Angel spoke with the expectant mother about our concerns, she was honest that she was starting to question her decision and was not sure what would happen next.

After two lost opportunities and a lot of heartbreak, we were exhausted; however, we weren’t going to be given any time to rest. We were contacted with a third opportunity, but this one came with a lot of questions. The expectant mother had received very little prenatal care, and her due date was questionable at best. Jolene and the expectant mother texted and connected almost immediately. She wasn’t comfortable speaking on the phone, and we were okay with that. We spent the next handful of days texting throughout the day and booked tickets to visit her in just a couple weeks.

While out to dinner the following weekend, Jolene received a text from the expectant mother that she believed her water had broken. We were shocked. Since we didn’t know her due date, we weren’t sure if she was too early or if this was a timely delivery. With little to go off except that she was going to the hospital, we scrambled to pack our bags and find petcare, and the following morning, we headed to the expectant mother.

We arrived in her state overwhelmed, exhausted, and anxious. It was close to midnight by the time we left the airport and arrived at our hotel for the evening. The next morning, we went to the hospital and met the expectant mother and father for the first time. It was, admittedly, uncomfortable at first, and we did not want to overstay our welcome.

Before we had a chance to leave, the expectant mother called us, which she never did, and told us her son had been born. We knew the baby was early—it was estimated the baby was only thirty weeks—so we knew our time in the baby’s birth state was going to be extensive. We packed our car with suitcases, baby necessities, and our dogs and started the long drive to meet our son.

As soon as we arrived in the birth state, we headed straight to the hospital. There were some paperwork complications, and we had to wait until the birthmother approved us to see the baby. The first time we met our son, Rio, was in the NICU with his birthmother by our side. We were blown away by him and his fight. It wasn’t easy to bond with him immediately because his birthmother was by our side, and we wanted to respect her emotions and grief.

Rio’s birthmother spent an additional five days in the hospital, and each day she said she was going to come visit but did not. We understood how difficult it was to see Rio and could not fathom what she was feeling. After she was discharged from the hospital, she and Rio’s birthfather moved out of state to live with friends in a more stable environment. We were proud of the choice she was making and the life she was working to build for herself.

We remained in Rio’s birth state for an additional five weeks while he gained strength and was approved to travel home. It took a lot of new parent learning and advocacy to get approval for Rio to travel home, but we finally received it and were thrilled to welcome Rio into our world!

A Journey Worth It

There was nothing about our adoption journey that wasn’t complex, from one connection after another, an unknown due date, and back and forth travel in one week to our son’s premature birth and an extended stay in his birth state. With all that being said, we would do it all over again if it meant having Rio and his birth family in our lives.

Rio is our greatest blessing, and without his birthmother and birthfather, we would not be the parents we are today. We’ve maintained an open relationship with Rio’s birth family and have established healthy boundaries. We know there will be a time when Rio will want to know about his birth story, and we want him to have access to as much information as possible; that means being able to speak with his birthmother. We are honored to have them in our lives and consider them family.