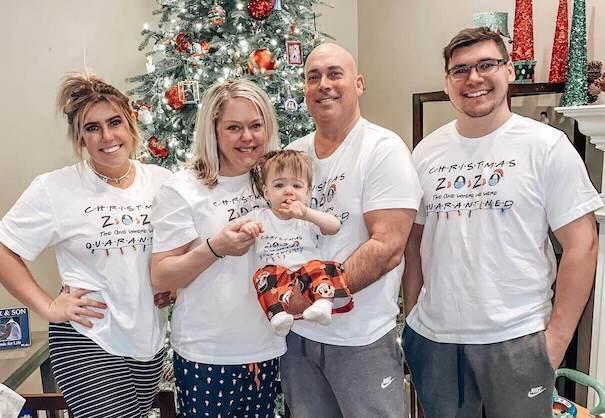 When we met, we had both been previously married, and Mark had two children from his previous marriage. They were in middle school by the time we met, and while Jaime stepped in immediately as a bonus mom, we both knew it was Jaime’s dream to have a child to raise from birth. After we started trying for biological children, Jaime was diagnosed with PCOS, and we started down the path of fertility treatments. Admittedly, it took time for Jaime to let go of the idea of biological children and walk away from fertility treatments. About six months after a number of failed treatments and an awakening moment at Target, Jaime realized it wasn’t a pregnancy she was craving but a little voice calling her Mommy.

Jaime was the first one to bring up the idea of adoption, and initially, Mark wasn’t completely on board. But after only 24 hours of considering adoption, he did his own research and found Angel, and we had a meeting scheduled with them.

We did quite a bit of online research but found we were most comfortable with Angel. We were able to sit down with them in their offices, and they were so warm and welcoming. We were anxious to be officially getting started and were constantly questioning if we were making the right decision, but we were full steam ahead and jumping in.

Our profile was only chosen once by an expectant mother, and we had a long wait until we were chosen. We spent those months trying not to wrap ourselves around just adoption but enjoying our time as a couple, taking on house projects, and traveling. Adoption was always in the back of our minds, but we’d been advised not to let it consume us. We did go against the one cardinal rule of adoption and set up a nursery. We thought it might help put positive energy into the process and manifest our adoption. We had trust and faith, and setting up the nursery made it feel real.

About one and a half years into waiting, we got the call that we had been waiting so desperately for; our profile had been chosen by an expectant mother. The expectant mother was believed to be in her second trimester, and we were the only family she was interested in. Mark got the voicemail from Angel first, and when he shared the news with Jaime, it instantly felt real. We started texting with the expectant mother and started to learn more about her and her family. We spent six weeks texting since she was never open to a phone call, and most of our conversations were trivial. We found that if we tried to discuss the adoption or her pregnancy, she would shut down. Following her lead and comfort level, we kept our conversation more about our day to day. We figured the adoption part would work itself out eventually.

After having attorney services hired and weeks of talking, the expectant mother stopped responding to us. We were providing financial assistance and feeling discouraged by her lack of communication. We were open to continuing to move forward, but the expectant mother’s lack of communication with us and the attorneys had Jaime worried. It was Mark who said, “No, we need to continue to provide support.” He had so much faith that this was the opportunity meant for us, and his faith helped push Jaime forward.

When the lack of communication became too much to bare and Jaime’s faith started slipping, she closed the nursery door. We had put time, money, and our hearts into the room, and suddenly it felt like maybe this wouldn’t happen. We chose to take a trip to Disney World as a distraction. While sitting in England at Epcot, Jaime received a text from the expectant mother after two months of silence. We were both floored. It was a simple request for financial support that we weren’t already providing. After confirming with the attorney, we sent the expectant mother the approved amount. We were hopeful this was her reopening the door to us, but sadly, it would be another three weeks before we heard from her again.

When we did hear from the expectant mother again, it was a simple text letting us know she was in labor and at the hospital. Since our relationship hadn’t been the most communicative, we were unsure if that meant she wanted us there and if we should travel. Our hearts were telling us to go, so we drove three hours to a larger airport and hopped on a cross-country flight to the expectant mother.

While we were in the air, the birthmother delivered her son, which we found out as soon as we landed. The social worker was the one who called and shared the news with us and also the news that she had named her son. We became anxious about her choice to name him; was this her attaching to him? We had hoped to be able to go to the hospital that evening, but since the birthmother was not ready for us yet, we went to the hotel to rest.

The first time we met our son, Jacob, he was in the NICU and the most perfect baby boy. The first day together as a family of five, Jacob’s birthmother signed over her parental rights so we could make the medical decisions during his NICU stay. We ended up spending two and a half weeks with him in the NICU, spending the day with him and then returning to our hotel each evening.

In the early NICU days, we had tried to meet his birthmother three separate times, and each time, she was unable to meet us. We were getting discouraged and found it really difficult to stomach going home without meeting her. We finally reached out via text and told her how much it would mean to us to meet her, give her a hug, and spend an afternoon with her and her children. We were finally able to treat Jacob’s birthmother and her children to an afternoon at the aquarium, and while there were some uncomfortable moments, it was a great afternoon spent together. Her seeing us interact with her other children and us being able to show our appreciation for her really seemed to help solidify her decision in choosing us as Jacob’s parents.

Through our conversations with Jacob’s birthmother, we agreed to a semi-open adoption. We had been in contact with her through a messaging app where on his monthly birthdaywe would send a couple photos. More recently, our communication has stopped, but we are open to re-exploring a relationship in the future if the time is right. It is important to us that Jacob know how much his birthmother means to us and how much we respect and honor her choice in choosing adoption.

Throughout our journey to Jacob, there were times when we both waivered. Mark never lost faith, but it was not easy all of the time. We were able to balance each other out and continue to share in our faith that this would work in the right timing.

After almost six weeks in Jacob’s birthstate, we returned home. Our clearances were delayed due to adopting over a holiday, but that just meant more time with our little man before we had to share him with the world. Bringing Jacob home was a dream. The nursery we had so carefully planned and decorated was finally home to our son, but in that moment, we both realized it was never about the nursery or how ready our home felt but how complete our family felt.