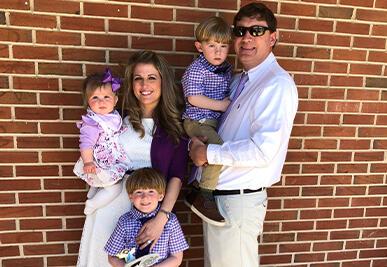 At a young age, Elizabeth would dream about adoption and tell anyone who would listen about wanting to adopt. Elizabeth would often find herself researching adoption and even tried convincing her parents to adopt a daughter from Russia. That did not work out, but she did come across a company called Angel Adoption. Elizabeth told her parents she would use this company when she adopted a child.

After having been blessed with two biological children, we wanted to have a third child. We talked about adoption, and it was soon after that we would join Angel Adoption. Starting the adoption process brings up so many emotions of being scared but excited as well. Our families were supportive, which made the process a little easier.

It was not long after we had joined that we received a call from Angel staff. They told us a mother who was 28 weeks along was looking into adoption and wanted to talk to us. It was so exciting to have an opportunity, so we called right away to start talking with her. The first conversation went well, and we talked every day after that. Elizabeth did not know if she would place or not, but the connection was immediate. There are no words to describe the bond Elizabeth and the expectant mother had.

The expectant mother was struggling a lot and opened up to us about what was going on in her life at the time. Her mother was diagnosed with terminal cancer on top of being young and pregnant,and it was overwhelming for her at times. The expectant mother was adopted from Russia when she was a baby, which could explain one of the reasons Elizabeth felt connected to her. The only family she had was her mother, and the thought of giving birth and not having her mother around was scary for her. In the time we had to talk with her, we became close and built a beautiful relationship.

We received a call that the expectant mother was in labor, so we asked her if she would like us in the room with her. We did not receive an answer, which was odd, but then we got a call from Angel staff stating she had the baby. One of the worst fears was something not working out, and when we were told she decided to parent, we were heartbroken. We respected that decision and wrote to her to express our support. We continued to stay in contact after that, and she sent us pictures and updates of the baby.

When her daughter turned six months old, her mother passed away. We were having a birthday party for our son when we received a call from her letting us know the news. She asked us if we would come pick the baby up and keep her for a week. We packed up everything and left to meet her halfway, which was about three hours from us. When Elizabeth arrived, she went to get the baby from the backseat, and as soon as the baby saw Elizabeth, she smiled. It was like she already knew her, and it was a special moment that still holds a lot of emotion in our hearts.

Our family came to see Daisy and help us out for the week we had her. Daisy was perfect and never cried. It felt like she belonged with us and connected with everyone she met. It was sad when we had to say goodbye to Daisy, but there were a few more times she asked us to keep Daisy for a week at a time. Then she asked us to keep her for another week and another week. Finally Elizabeth suggested that we would love to adopt Daisy. She said she would be happy with that as long as she could still receive pictures and updates. We of course would honor that request.

We contacted Angel to ask that they help us with the adoption process, and right before her first birthday, she was officially ours. We celebrated her first birthday with a daisy theme, and her birthmother came to celebrate with us. She brought some gifts, which were gifts her mother gave her from Russia when she was a child. Sarah really wanted Daisy to have something of hers.

As your adoption journey starts, it is easy to have a vision of what you think your journey will look like, but we quickly learned it does not work out the way you envisioned. It is important to let go of any expectations and trust the process. We believe there is a bigger plan for your life, and Daisy was part of our life’s plan. It might not have happened the way we thought it would, but it was worth it.

Take all the uncertainty and emotions in stride, and remember that even if it does not work out, there will be an opportunity out there that will. Remember to respect your baby’s birthmother, and allow her to do things at her pace even when that might be hard at times. We are forever thankful for our relationship with Daisy’s birthmother and the gift of our beautiful daughter.