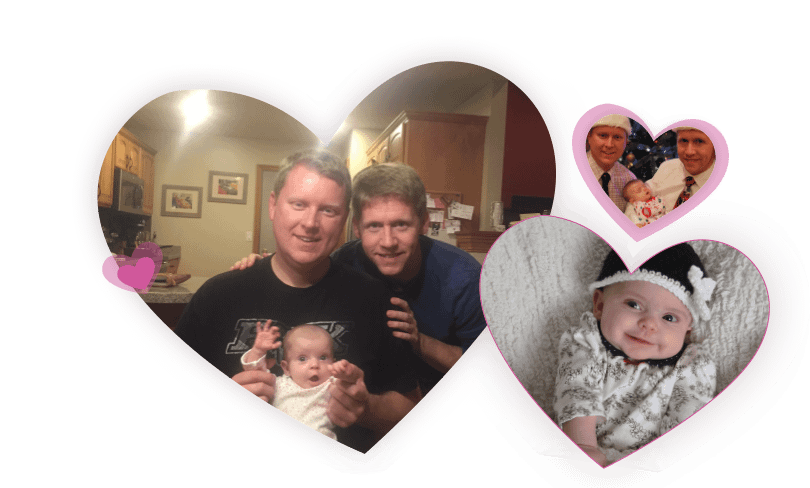 After seven years together, we determined that the one thing missing from our family was a child. We did not think it was a possibility for us, but being in our late 30s we had reached a time in our life where we could make possibility a reality through adoption.

A friend of ours who adopted went through another agency in Illinois. That agency did not work in Ohio, where we live, but we learned about Angel Adoption from that agency. We reviewed Angel’s website and success stories, and after a phone call to learn about the process and some additional research, we chose Angel. No other agencies were even in consideration when we made our decision.

This child would be the only grandchild for both of our parents, so they were excited that we chose adoption. Throughout the process they asked questions and asked for updates about us being chosen by a birthparent. They were excited when we shared that we had been chosen.

That our profile would be available to so many parents who were considering adoption. Since Angel works with most US states, this indicated to us that our chances of being selected would be high. And the average wait time was only about a year.

We exchanged calls, texts, and pictures with the birthparents, but we did not meet them until our baby girl was born. We just hoped that the birthparents would like us and be confident with their decision to choose us all along the way. The birthmother had some doubts initially since our life hasn’t followed the same path as hers, but through continued conversation she became very comfortable and happy with us and her choice of us as the adoptive parents.

Describe receiving the call that your baby was being born and traveling to meet her.

We arrived in Illinois one day prior to the birth of our daughter and were staying at a nearby hotel. We knew the birthmother could deliver at any time. We received updates from the birthfather the morning the baby was born and received a message to come meet her about an hour after she was born. We were just ten minutes away from the hospital, so we were anxious and excited knowing that we would meet our daughter in just a few short minutes and our lives would be forever changed.

Meeting our baby was also our first time meeting the birthparents. The nurse presented the baby by asking us, “Would you like to meet your daughter?” The birthparents were present in that moment, which was very surreal for us. The hospital offered us a private room where we could bond with our baby, which we graciously accepted, having never considered the possibility that we would be accommodated so well by the hospital. We spent the first hours of our baby’s life together as a new family before reconnecting with the birthparents.

Did you choose an open or closed adoption? How did you make that decision?

We were open to both options and through discussions with the birthparents we mutually agreed to an open adoption. We didn’t set any parameters on what that would look like initially and consider it to be an evolving process.

The birthmother agreed to provide breastmilk for the first few months following delivery. We live in Ohio, and the birthparents live in Illinois, so we met up twice in Indianapolis for brunch and to pick up the frozen breastmilk. We haven’t met in a few months, but now we share monthly updates and pictures via text.

For us it was the fact that our baby was in the NICU for a few weeks, so the surrender was delayed. That put us in the awkward place of the birthmother still being the legal healthcare decision maker and us being in limbo. That was a significant frustration since the agency couldn’t place the baby with us, and it created an unforeseen opportunity for the birthmother to change her mind.

Adoption can be a lengthy process — how did you get through it?

We were encouraged to go about our lives and not plan around the adoption since there was no specific timeframe, so we did! In fact, we scheduled a Thanksgiving trip to Key West and a Christmas vacation to the Dominican Republic, both of which we cancelled since the baby came along in October!

Would you adopt again? Why or why not?

We have discussed adopting a second child, but likely won’t because Cory has turned 40 since baby Avery came along and I will soon be 38. So for us we will choose to give Avery our love and devotion and everything she will ever need. I was raised an only child and know that, while a sibling may be desirable for a short time during childhood, being an only child also has significant benefits that I have appreciated most of my life.

Choose adoption when you’re at a place in your life where no part of the process will be overly burdensome, namely the cost and the wait. The time will come and the wait may be shorter than you think. Once your baby comes along, the time spent waiting will be insignificant as your new life as a family begins.