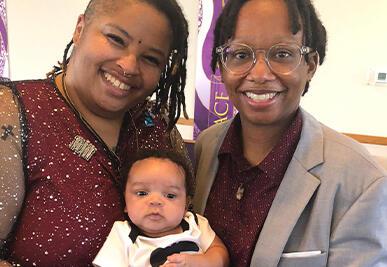 Before coming to adoption, we went through fertility treatments to try to grow our family. It was an emotionally, financially, and physically difficult process, and we knew we could not continue further. We had multiple friends that were adopted, and while we always knew it was an option, it wasn’t one we had fully explored.

When we turned our hearts toward adoption, we found Angel. We faced extreme home study delays as we started the adoption process at the start of the COVID-19 pandemic, and Angel was gracious enough to pause our contract while we slowly worked through the home study.

After a six-month delay, we were finally ready to be presented. Within two months of our profile being active, we were chosen for the first time. We would end up speaking with twelve different expectant mothers. We formed a personal relationship with each mother, regardless of how long we communicated with her.

Some of the women we worked with we only spoke with for weeks, others a bit longer. They were all beautiful in their own way, and we shared our hearts with each of them. We knew how important the expectant mother relationship was, and we tried to put our best foot forward each time and not carry with us the hurt from the last disruption, which wasn’t always easy. It was particularly difficult after we worked with a woman who we believed to be pregnant with triplets and only found out she was not pregnant at all when we went to visit her. We were able to spend time with her at her house, and she appeared pregnant. The following day, when we showed up at her doctor’s office for an appointment, we found out they had no record of her as a patient. We spoke with our attorney the same day, and they had found out she had used the same story with multiple families across the U.S. and had received financial support from many of them.

Although the deceit was difficult to overcome, we continued forward. About one year into having our profile active, we moved across the country but chose to not pause our contract again. As we navigated a new city and home, we also started a brand new home study. While we were working on our home study, our profile was chosen again. The excitement of being selected had worn off, but as we got to know this expectant mother, something felt different. It felt genuine, it felt real, and it felt like this could be it.

We spent four days in our home state, and on our way to the airport, we received a call from the expectant mother that she was bleeding and believed she was having Braxton Hicks contractions. She was going to the hospital. We asked her to keep us updated, and we continued our plans to head home. We later received a second call from the hospital that she was in labor and this baby was coming—today. As we drove to the airport, we received a text from the birthmother saying, “He’s here!” We were really thrown off by the “he” and asked who he was. The birthmother told us he was our son. We were shocked. We had all been expecting her to have a girl!

When we got to the airport, we switched our flights and got on the last flight to the expectant mother’s state. Our flight landed late in the evening, and we then got the last rental car and headed to the hospital.

After sitting anxiously on our flight, knowing that our son was born, we were so excited to get to the hospital. Thankfully, the hospital was only 20 minutes from the airport. When we got to the hospital, our son was in the NICU because he was born early. He was healthy and did not need any assistance, but his birthmother had tested positive for COVID-19, so they wanted to monitor him for symptoms. Meeting our son, Prosper, brought a wave of emotion. After the previous days of emotion, to be blessed with a child was a gift. He was so small and so adorable. We could not believe this time it was real. We had our child.

Prosper’s birthmother wanted a closed adoption, and we knew our only chance to meet her and hug her was in the hospital. Due to her positive test, we were unable to meet her in person. It was heartbreaking to know she was just doors away from us and we could only text her from down the hall. We were able to bring her some snacks that the hospital staff was able to deliver to her, but it was still upsetting that we were not going to have the opportunity to meet her.

After four days in the hospital, we were able to discharge with Prosper. We spent an additional ten days at our hotel with Prosper, waiting for our travel clearances. We ended up doing quite a bit of shopping, since he had been born early and everything we had prepared was still at home. We were so thankful to hear from our attorneys that after two weeks in Prosper’s birth state, we were approved to travel and we finally headed home after weeks away.

Our Family of Three

Our adoption journey to becoming Prosper’s parents took just over one and a half years, but it never felt that long. With twelve expectant mothers, full-time jobs, traveling, and a cross-country move, we were constantly on the go. We never wanted to pause our lives for adoption, and staying busy was a positive for us.

While it was emotionally taxing to work with as many expectant mothers as we did, each one brought us one step closer to our son and becoming a family of three.