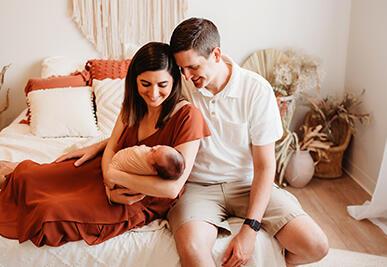 Not long after we got married, we started trying for children. Just before our only pregnancy, which resulted in a miscarriage, we started discussing adoption. Michelle had cousins who were adopted internationally, and she knew how special and normal the relationship could be between adoptees and their adoptive parents. Sean hadn’t considered adoption in the past because he never imagined it would be so difficult for us to have children. Thinking about the love he had for our nieces and nephews and that they were not biologically his really opened his eyes and heart to the adoption process.

Once we were in, we were in. We started researching and connected with Angel. We loved how easy their application process was, and after our initial meeting, we felt confident this was the program for us. We took an additional six months to get our adoption finances in order and officially joined their program.

For almost the first year and a half with Angel, nothing happened for us. We just waited. Our year was busy with family weddings, and we worked really hard to enjoy the time with just the two of us. We were hopeful it would never just be the two of us again, and we wanted to value the time we had.

In the late fall, we finally got the call that our profile was chosen. It was surreal to find out someone had liked our profile enough to choose us. We started texting with the expectant mother almost immediately, and it felt like a great connection. Only three weeks into talking to the expectant mother, we found out she had not told the expectant father she was considering adoption. When he found out about the adoption plan, they ultimately chose to parent together. We were definitely bummed but completely understood why they had made their decision. Even after the disruption, we continued to pray for her, and as her due date came and went, we thought of her often.

Only three months later, our profile was selected again. We started texting with the expectant mother that night and, again, hit it off immediately. She was in her second trimester and had two daughters already. We found out she only lived about eight hours from us, and she had put so much thought into her plan. She shared with us that she actually chose us much earlier in her pregnancy but wanted to be a little further along before she spoke with us so she was out of the miscarriage risk timeframe.

From the very beginning, there was trust between us and her. We set communication expectations early and understood we both had busy lives. Even with our busy schedules, we managed to text daily, even if it was just a quick check-in.

Two weeks after we started talking, the expectant mother was able to find out the gender. We wanted to do a gender reveal, so she emailed us the information, which we brought to Party City to have them fill a box of balloons. It was so fun to find out with our family and friends that she was having a boy! The same evening, she also asked if Michelle would be in labor and delivery with her when the time came. We felt so honored that in our short connection she already trusted us enough to invite us into such an intimate moment.

As our relationship continued to grow, we planned to visit her in the spring. About one month before our planned visit, we could tell she was having a really difficult time in her personal life, and it was weighing heavily on her. Michelle offered to visit for a “girl’s day.” Michelle and the expectant mother got their nails done together, had lunch, and later picked her daughters up at school and played a game together that afternoon. The expectant mother gave Michelle so much parenting and baby advice, and we have used much of it! She had chosen a very natural path for herself during her previous pregnancies, and our respect for her as a mother grew tenfold. The following morning, Michelle, the expectant mother, and the expectant father all had a chance to have breakfast together, and while he was shy, it was nice to connect with the expectant father for the first time.

After a great solo visit, we were able to visit the expectant parents again about one month later. We had a very similar weekend, minus the nail appointment. We spent time with her children and the expectant father, playing games and getting to know them further. It was a truly enjoyable weekend together and furthered our comfort with each other.

About eight weeks before her due date, our friends and family threw us a baby shower. We were feeling so confident in her adoption plan that we felt great about having this celebration with our loved ones. Shortly after, the expectant mother was diagnosed with preeclampsia, and with the diagnosis came an early induction plan as her due date was moved up by six weeks. Our relaxing summer had turned into an excited panic, in the best way.

With the accelerated due date and a new birth plan of Sean also being in the delivery room, it was really important to all of us that we be able to be there with her. Around the time of her anticipated delivery, we drove to her state and stayed one night with Michelle’s cousin before planning to travel to the expectant mother. At a doctor’s appointment that day, they removed her preeclampsia diagnosis, and we had to decide if we wanted to sit in her home state and wait or head home. We decided to head home and wait for her due date in our own space.

Even with her original due date back in place, she had talked about trying to induce her own labor through natural methods, and we wanted to respect her wishes. She had mentioned she had started having contractions, but we weren’t sure it was time to travel yet. While out to dinner one evening with our family, the expectant mother texted that her contractions were five minutes apart, and while Michelle was still hesitant, Sean was the voice of reason that if we didn’t take action, we risked missing the birth. That was all she needed to hear to quickly pack. Running on adrenaline, we hit the road and drove through the night to the expectant mother.

The following morning, the expectant mother had a doctor’s appointment, and after her blood pressure was high again, they decided to admit her to the hospital. We met her there, and Michelle sat with her while we waited for her to get her room. Once settled into her room, Sean and the expectant mother’s sister joined them. We were nervous to meet her sister but our nerves were quickly calmed. She was so sweet and genuine in supporting her sister and getting to know us.

After a long day of laboring, everyone had fallen asleep, and nurses started rushing in and out. The expectant mother’s labor had progressed so quickly that it was time to push!

The expectant mother was an absolute rockstar, and after only one push, our son, Liam, was born. Sean had the opportunity to cut the cord, and Michelle was the first to hold him. His birthmother was amazing and continued to say she wanted this moment to be special for us. Her thought and care for us through her own delivery was so selfless and more than we ever could have asked for.

Liam had difficulty breathing, and with his early delivery, he ended up spending seven days in the NICU. Initially it was just us there with him, but eventually his birthparents were able to spend time with him as well. We had always agreed to an open adoption, and that started in the hospital. We started a shared photo album with his birthparents, biological aunt, and biological grandparents and were uploading photos from the hospital.

The day we were discharged from the hospital, our first stop was to Liam’s birthmother’s house so his sisters could meet and hold him. The following day, his birthmother, sisters, aunt, uncle, and cousin came to our hotel for a pool party, and he was able to meet more of his family. While Liam will not have those core memories, his family and we will, and we are forever grateful.

Our lives before Liam seem unimaginable. It’s hard to remember when it was just the two of us. Our relationship with his birthmother and birthfather is one we cherish and do not take for granted. We still speak with her often and are slowly seeing that time is healing for her. We look forward to the day when Liam can make his own memories with his birth family and find love and respect in his own relationship with them.