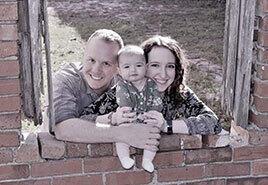 Connected Despite the Physical Distance

We always knew we wanted to adopt a child. After three years of marriage, we decided to start trying to get pregnant. We weren’t successful, but at a conference, a lot of people were talking about adoption. We started to do our research, and we just knew Angel could help us succeed. After a lot of reflection and prayers, we decided to begin the process to become adoptive parents.

In the beginning, we didn’t know what the process was going to be like. Daryll was halfway through his deployment. We had to do interviews on Skype and on the phone with him during this time. It was hard just to complete all of our applications, home study, etc.

When we spoke about the process with our families, they were all really supportive. Many of our family members were adopted, and they understood what we were going through and were really excited about helping us weather the ups and downs.

A year into our process, we made our first connection. We spoke to the expectant mother every day. She was shy and had anxiety about the situation and also had another child. When it got closer to her due date, she seemed a bit nervous. During a doctor’s appointment on her due date, she turned off her phone. We were worried as we tried to call her and later found out no one was able to get in touch with her. She had obviously changed her mind. Without communication, we were also worried about her baby. This first disappointment was emotionally draining on us, but we took comfort in knowing we still had another year to go. We wanted to stay optimistic.

Our second connection happened not too long after this disappointment. She ended up delivering three months earlier than her due date while Daryll was away for military training. When Maddie received the phone call, she started planning immediately to begin the drive by herself. But about an hour or so before she was ready to head out the door, the expectant mother ended up changing her mind at the hospital.

We had difficulty processing this disappointment. We were separated and couldn’t communicate as much as we wanted to or help to lift each other’s spirits. Our third connection was not great either, but our fourth one led us to our daughter, Audrey.

Audrey’s birthmom was introduced to us when we were processing the disappointment from our second connection. Three weeks before Audrey was born, she invited us to meet her and go to her appointment with her. Her mother was there as well, and we spent half a day with them as we all answered each other’s questions. She also brought ultrasound pictures for us to have, which showed Audrey’s gender. We were so excited to be having a girl. Meeting her eased our anxiety about the situation.

Her due date came and went. Her doctor wanted her to come back a week later, but she had a strong feeling she would be delivering that weekend. About twelve hours after we last spoke, she started having contractions. Working for an OB/GYN, Maddie spoke with one of the doctors at work about her symptoms. They said we needed to go to the hospital ASAP.

We packed up our bags, got groceries for the dog sitter, and loaded our car. While we were driving to the hospital and almost there, we received a call from her: “I’m at nine centimeters. I’ll be having the baby soon.” We arrived at the hospital and knocked on her door to let her know we were there. We didn’t know whether she wanted us there or not. Then, abruptly, a nurse came out. “Come in. She’s about to have the baby.”

Soon after, Audrey was born, and we were there for the delivery. Daryll looked at Maddie when they asked him to cut her cord. He was swaying a little when he stood up, and Maddie said, “If you pass out on me right now, you’ll never live this down.” He managed to cut Audrey’s cord without passing out.

After the birth, they put Audrey under a heat lamp. Daryll held her hand as she sucked on his finger. We both looked at her in sheer amazement. We couldn’t believe we had been given this amazing gift. We felt at peace knowing we were now a family.

They had an extra room for us at the hospital, and we were able to stay with Audrey the entire time we were there. The next day, Audrey’s birthmom asked to see her before she was discharged from the hospital. She and her mom and sister were able to see Audrey and give us hugs before leaving the hospital.

It’s been 24 months since we started our adoption journey. Due to Daryll’s deployments, we had to work hard on communicating everything. Our emotional connection with one another grew stronger during this process. Adoption is not easy, but it’s been so worth it. Every day, when we look at Audrey, we know she’s been born from our process of patience, trust, and perseverance.