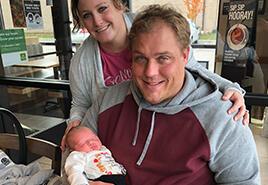 Our journey to find our daughter, Skylar Grace, was a bumpy one. We received a call from Angel about an expectant mother wanting to talk with us. We were overjoyed and, without any hesitation, agreed to move forward with her. We quickly hit it off and were connected for four months before the baby was born prematurely. We made it in time for the actual birth, and Tony cut the umbilical cord. We were caring for the baby for four days in the NICU when we received the earth-shattering phone call from our lawyer saying the expectant mother had changed her mind. We went home with broken hearts and no baby. We had given up hope and even discussed what we would do if we did not get a baby within our designated contract time. We thought maybe we would foster if adoption did not happen for us.

Nearly a year after the first phone call, we received another one. This time the expectant mother was due in six weeks and was talking to multiple families. We thought, What do we have to lose? So we texted her immediately but did not receive a reply. Later that night we sent a photo of our dogs and said, “We are parents without a baby. Know we are here for you.” The expectant mother replied and said she wanted parents for her baby and for the baby to know they were loved. We texted periodically until she told us we were her main connection. Angel contacted us a week later saying she had chosen us. We were nervous, scared, excited, and hopeful. We created a plan that we would fly to the expectant mother’s state to be there for the birth. Unfortunately, when Skylar was born, we were still at the airport and missed it. When we arrived at the hospital, we met the expectant mother, and she was happy to meet us. Then we met our daughter. The nurse gave us instructions, and we were off on our own. We only missed eight hours of her life. We have been inseparable since meeting Skylar.

Skylar’s birthmother signed her rights away, and then we had a four-day waiting period for her to change her mind. Those were the scariest days of our lives. Even after the time was up, we were nervous because of our previous experience.

We talk every now and then and send updates with photos. We had originally decided on a semi-open adoption, but upon meeting us, Skylar’s birthmother said she would be open to visits.

The hardest part of adoption is the unknown and the waiting. Not knowing if you will be chosen, let alone make a connection, is extremely stressful. Since we had lost one baby, we feared the worst in this situation although all of the signs pointed to it working out.

Our friends and family embraced Skylar immediately. They showered her and us with gifts upon getting home. We decided not to have a shower because we were superstitious, but we did make baby registries with the essentials. Her nursery was completed within the first week of bringing her home.

We would definitely adopt again because we want Skylar to have a sibling. The adoption process is the most challenging obstacle we have ever faced, but the reward of having that sweet baby in your arms makes all the fear and stress worthwhile. She was always meant to be our daughter, and that was made possible by her strong birthmother. Skylar’s birthmother is such a selfless woman, and because of her selfless act, she made us a family of three. For that, we will be forever grateful. Adoption is love, and Skylar is proof of that love.