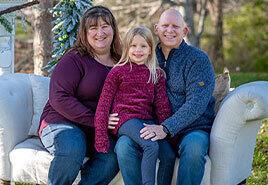 We found each other a little later on in life than we would have liked, in our mid to late 30s but still knew that we wanted to start a family. Early on in our marriage, we just never had any luck conceiving. We talked about trying infertility treatments and quickly decided that we didn’t want to put ourselves through the emotional, mental and physical stress of infertility treatments. Jenny had moments of feeling betrayed by her body and struggled emotionally. Adoption was always in the back of our minds as it is prevalent in our family. We had a cousin and neighbor who were adopted, and Bill’s best friend was adopted. We finally decided that adoption was going to be the best choice for us. We came across Angel Adoption and immediately jumped in after meeting with the staff and learning about the many families they had helped!

We read a lot of stories about how much preparation we would need to do in order to adopt, the emotional roller coasters, and it was important for us to get blessings from our families. We did not need their permission, but we wanted to know they gave us their blessing and we had support. They were so excited and happy for us that we were growing our family. We did eventually tell friends and other family members, and everyone was on board and happy for us. We were surprised we never received any negativity, which showed us we had a great support system in place. From reading about adoption, we knew how important our support system would be going into this process, and we were thankful.

You are told from the beginning that a family could go through failed opportunities and that the heartbreak would be part of the process. We were prepared for that going into our adoption journey but were lucky to not experience that in our journey. We were several months into our journey with no opportunities, which started to cause discouragement, but we trusted Angel and the process. After several months, we were chosen by our expectant mother, who was earlier on in her pregnancy. This was finally our moment to get to know an expectant mother, and, Of course, we were so nervous!

Right away we wondered if we were texting too little or too much, which is completely normal with any new relationship. Having no idea what to say or if this would even work out, we dove in head first and hoped for the best. After months of getting to know each other, the expectant mother called us to tell us she might be having contractions. We were so lucky because we only lived a few hours away from her, so getting to her quickly was not an issue. We arrived in her city very late and checked into a hotel. The next morning we contacted the expectant mother in the morning to take her to the hospital so she could be checked out. She had not been to the doctor during this pregnancy. This was not her first one and it wasn’t easy for her to get there. We knew not having prenatal care was typical and that she was an experienced mom, so we had faith that everything would work out! She knew her body and we chose to trust her, after all, She was trusting us with the greatest gift! This visit would be a false alarm, so we left the hospital. The baby was not ready to make her appearance just yet!

A Baby Was Born

A few weeks later, we decided to go see her again. She did not have a bathtub and had expressed how much she wanted to relax in a bath. We picked her up once we arrived along with her children and took them back to the hotel with us. The kids would get to swim and have fun, and she would get to take the bath she very much deserved. We got some dinner and watched the snow start to fall.

She ended up going into labor, and Jenny was able to hold her hand during the birth. This was a surreal experience and something that cannot be put into words. William stayed back at the hotel with the children and met up at the hospital later. Laying eyes on a beautiful baby girl was one of the best feelings in the entire world. We decided on the name Piper, and the next few days were emotional. As beautiful as this was, there was also some sadness as this was not the way Jenny envisioned becoming a mom. We were so thankful and will be forever grateful for the gift the birthmother gave us in Piper.

Bringing Piper home was a moment we had waited for, and it was finally happening. Our hearts and our arms were so full. We agree on an open adoption, and Piper has been lucky enough to know who her biological mother is. Piper has also gotten to know her siblings, which we are so thankful for. Piper would love to have a sibling at home who lived with her, but having so many wonderful siblings in her life is such a gift. We try to visit with her siblings when we can. When navigating your adoption journey, the best advice we can give you is to live your life. Realize it is okay to have feelings come up and for doubt to show its ugly head. Lean on each other and your support system, and focus on being happy together. A lot of self-care and reflection helped but also staying focused on our goal. We are so thankful we took our leap of faith because it led us to having a beautiful relationship with Piper’s birthmother, siblings and our forever love of our lives, Piper!