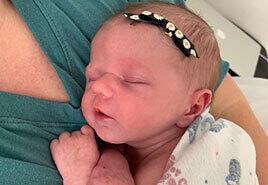 After a number of years of trying for biological children and undergoing infertility treatments, we shifted our family planning focus to adoption. We knew we were most comfortable with a domestic infant adoption and started online research. When Grace found Angel, we felt an almost immediate reassurance. They provided so much upfront information, and our conversations with them were easy. We felt confident Angel was going to be the one to help us grow our family.

As we began our wait, we threw ourselves into enjoying our life as a double-income, no-kids household. We wanted to stay distracted and not think too much about the wait. About six months into waiting, we received our first opportunity with an expectant mother. The expectant mother lived fairly close to us, and after a couple conversations, we agreed to meet her and attend a doctor’s appointment with her. When we arrived at the hospital, she was not there, and we confirmed there was no appointment under her name. We were starting to understand this person was likely not pregnant and was definitely not considering adoption. We felt horrible. As upset and confused as we were, however, we reminded ourselves that we knew this was a risk and that we had to continue to trust the process. We also only “lost” a half hour of drive time, so we knew it could be worse.

As it turns out, our second opportunity was the “worse” that our first one could have been. About one year into waiting, our profile was chosen a second time by an expectant mother. We started to build a relationship with her and, shortly after, hired attorney services. Through the attorneys and some super-sleuth work by Grace, it was becoming evident that while this expectant mother might be pregnant, the financial support we were providing was not going to the intended needs and the expectant mother likely had no intention to place for adoption. This disruption hit harder than the first one because we had not only emotionally invested but financially as well.

When Angel contacted us with our third opportunity, we were ready. Admittedly, we were emotionally a little more cautious, but we weren’t going to let that stop us. From our first conversation with this expectant mother, we could feel how much more genuine she was than the previous opportunities. We started by texting with the expectant mother and father and later moved to a phone call. Their care for the unborn child was evident, and while they were sad, they expressed their excitement for us.

Even though it was early in our relationship, we chose to visit with the expectant mother and father. They were considering us and another family, and we wanted to show that we were all in. After an evening together of easy conversation, the expectant parents told us they officially wanted us to adopt their daughter.

One morning about two weeks before her due date, we woke up to a missed call from her and a photo text of a baby girl. In that moment, our entire world changed. When we had a chance to speak with the birthmother, she told us she had gone into labor the night before and delivered her daughter within one hour of arriving at the hospital. It had all happened so fast that even if we had been awake, we never would have made it in time.

We quickly packed our bags and booked the first flight out to the birthmother’s state. After a long, delayed travel day, we arrived and went to our hotel for the evening. Throughout the day, we had spoken with the social workers, and they made us aware that the baby was in the NICU for close monitoring. This was a surprise to us as we had not expected there to be any reason for the baby to be monitored, but we were still hopeful to meet the baby the next day.

The following morning, Grace was allowed at the hospital and met our daughter, Lilian, for the first time. We knew that Lilian’s birthmother had not yet signed, so Grace was trying to be cautious but was instantly in love. Adam had to wait two days before he was able to meet Lilian, but the moment he did, his heart was forever changed.

Lilian’s birthmother chose not to sign her parental consents until after she was discharged from the NICU. The four days that she was in the NICU were emotionally Lilian’s birthmother was struggling with her decision to place for adoption, and we were trying to help her cope while also caring for a newborn in the NICU. We felt stretched thin but knew we had to continue to provide as much support as we could.

The day Lilian’s birthmother signed, it was an emotional day for everyone. We knew she was still reeling from her decision and that her lack of support from anyone besides us was damaging. We also knew she was struggling to trust that we would maintain a relationship with her, and there was little we could do in the moment to reassure her besides asking her to believe us. After five hours, she finally signed, and all we could feel was relief. When we went to see Lilian after her birthmother signed, we sobbed. We felt like we could love her fully, with no reservations.

After leaving the hospital, our clearances happened within three days. Within those three days, we were able to see Lilian’s birthmother one more time and her birthfather. Her birthfather brought one of his daughters with him as well, and it was a pleasure to spend one hour with them both.

We have agreed to remain in touch with both of Lilian’s birthparents through a private Instagram page. They have access, and we are able to upload photos and milestones. It has been so special for us to share those moments and reassuring for Lilian’s birthmother to see our followthrough.

A Lonely but Wonderful Journey

We anticipated that the adoption journey would be a difficult one, but we did not expect it to feel so lonely. We know others have come before us in adoption, but we personally did not know anyone that had, and oftentimes it did not feel like there were many people we could talk to. We are thankful for the support system we have, but it may have been helpful if someone in our support system had gone through their own adoption.

Even through the loneliness, we are so grateful for the journey that we had and our daughter, Lilian. With each challenge we faced, we never let it derail our ultimate goal and our dream of becoming parents. If we had lost faith early in the process, we would not be holding our sweet baby girl today.